Campaign for the Right of Entry/Re-Entry to the Occupied Palestinian Territory : 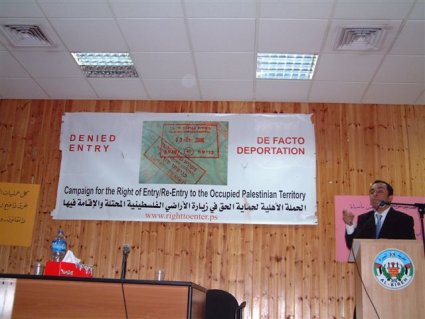 (Al-Bireh, Occupied Palestine – November 28, 2006) – Hundreds of foreign nationals packed into the Al-Bireh Municipality Hall to listen to legal experts explain the options available to them in light of Israel’s refusal to permit foreign nationals access to the occupied Palestinian territory (oPt). The audience was full of families with children, fearful that they will be forced to separate within days.

In a standing room-only lecture, Al-Bireh Deputy and Acting Mayor Omar Hamayel made a clear appeal that the Israeli policy of denying access to Palestinians who are foreign nationals be called ethnic cleansing. Attorney Abdallah Hammad from the Jerusalem Legal Affairs Center and Attorney Muhammad Dahleh discussed collective and individual actions that can be considered by those affected by Israel’s de-facto deportation of residents of the oPt.

Atty. Dahleh, a human rights activist and renowned legal expert noted that the proper legal reference for the issue lies in International Humanitarian and Human Rights Law. He also spoke regarding those Palestinians who have previously applied for family unification which allows for permanent residency. Israel has closed this door and created a reality where the Palestinian population is being forced from their homes. The final result of Israel’s practice could be the emptying of over 500,000 Palestinians from the occupied cities of Ramallah, Bethlehem, Nablus and others in a very short time as Palestinian residents leave to keep their families together.

Basil Ayish, spokesperson for the Campaign, noted that although the event was looking into legal options for affected families that are faced with forced separation, the issue is ultimately a political one, and that victims of Israel’s practice should take all measures to protest this action with the country of their citizenship. The Campaign stated that more than 80 percent of the latest Israeli denials for visa extensions are U.S. citizens.

The questions and comments of those in the audience articulated deep frustration and anger at their respective foreign governments and at the Palestinian Authority for not taking more concrete steps to immediately resolve this issue or at least raise it to a level of public debate.