At 11:30am three of us went to the olive groves to protect the Palestinian families living in isolated homes among the olive trees.

Two settlers came towards us from the Seyaj House yelling abuse at us “Fuck Jesus. We killed Jesus and we’ll kill you too!” We began filming and kept ourselves between them and the Palestinian homes. They tried to enter Hani’s house where we knew there was a number of small children and two women. We refused to let them up the path and they headed off up into the Abu Haikal olive orchard. We contacted other Human Rights Workers (HRW’s) to make sure that there were people at the Abu Haikal house in case they made their way there.

We did not see them again but as we were checking the olive orchard to see where they had gone we noticed another settler, dressed all in white sat in the far corner of the orchard and either reading or praying. We kept an eye on him. At around 4pm we saw him move towards the Abu Haikal house so another HRW and I climbed up into the orchard to follow him. We began to film him since he was already trespassing on Palestinian land. He began to climb the wall towards the Abu Haikal house but was not able to get over the fence at the top of the wall. He started shouting and waving to the settlers who were on top of the military observation post close by. 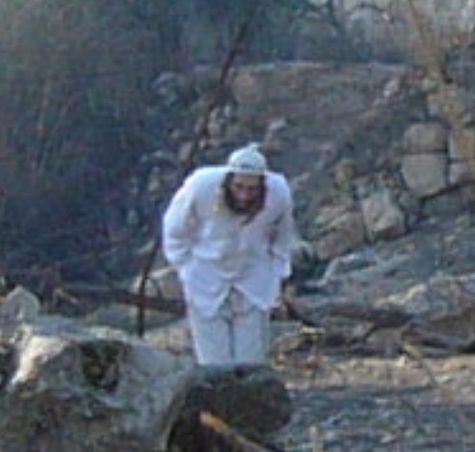 After a while he came down and began to move back towards H’s house. The other HRW had moved out of the orchard back to the Hedad House. I was worried about the children there so I moved through the orchard quickly to try to get to Hani’s garden first. Suddenly he started to run and charged straight at me. This was the first aggressive move he had made so I was taken by surprise. I ran towards Hani’s house. To get into Hani’s garden I had to climb down a rough stone wall about a metre high. He reached me as I got there and gave me a savage push over the wall. I hit my head on a stone and fell into the garden. He laughed at me. As I lay there I turned the camera on him and he began to run away. I got up to follow him and shouted to warn the other HRW’s whom he was running towards. There was a group of about 20 settler tourists standing next to the Hedad House listening to a tour guide and he ran through them and down the hill towards Shuhada St.

I could see that my thumb was gashed but not too badly. I could not see the wound on my head but it did not seem to be too bad. My ankle was not too painful. I had a bit of a head ache but I decided to keep working as we had another hour before sunset and there was a large number of tourists hanging around the houses. At one point there were over 80 settlers gathered around a tour guide and stopping at various points in the olive groves. One or two of them attempted to enter Palestinian land but went away when we told them they could not enter.

At around 4:30pm I heard some loud chanting from somewhere near the mosque. I assumed it was the settlers but when I went to investigate I discovered that a large group of Palestinian children were demonstrating against the large settler presence outside their houses. The settlers left and there was no trouble.

At around 9pm one of the other HRW’s in our apartment offered to clean up my head wound for me. She discovered that it was quite deep and long and thought it might need stitches so I went to Al Ahli hospital where I was given 2 stitches. They x-rayed my left ankle and decided it was not broken but probably sprained. They bandaged it up for me and cleaned and dressed the wound on my right thumb.