Palestinian youths demonstrated against the Israeli massacre in Gaza at the Israeli checkpoint on Shuhada street today. All shops in Hebron closed in mourning.

International Human Rights Workers (HRWs) arrived at 1pm to see Israeli soldiers firing live rounds at demonstrators who hid behind burning tires and threw stones. Two soldiers ran out from the checkpoint firing their guns. Ten minutes later five more soldiers ran out, followed by a further five riding in an armoured vehicle. They positioned themselves behind concrete road blocks, firing rapidly at the demonstrators. 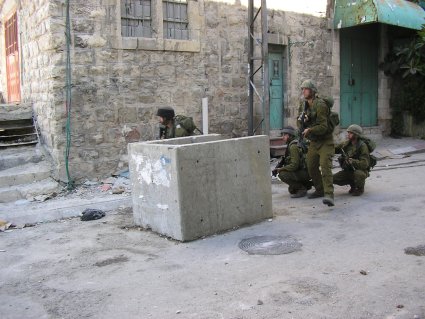 The soldiers then closed the checkpoint for the next few hours.

At 1.12pm a milkman arrived on his donkey and approached the checkpoint but was sent back. Immediately after, a Palestinian HRW heading out of the Israeli controlled H2 area into the Palestinian market in the H1 area of Hebron managed pass the checkpoint with a video camera. International HRWs heading the same way, however, were refused passage by the soldier on duty. Two Israeli settlers tried to exit but were also sent back.

The same armed settler continues filming from the comfort of the soldier’s section of the Shuhada street checkpoint (checkpoint 56).

At 1.24pm soldiers fired live and rubber-coated steel bullets at demonstrating youth. Soldiers then moved away from the checkpoint and toward the Old City. They moved up a side street near Beit Romano settlement to attack a group of youths at the end of the street. They were hiding around a corner behind a burning tyre. Once again the soldiers shot at the youth, who threw stones at them.

At 1.36pm Israeli soldiers advanced along the side street. Suddenly several Palestinian children around 11 or 12 years old ran around the corner and threw rocks at the soldiers. One soldier was hit on the leg and fell to the ground. 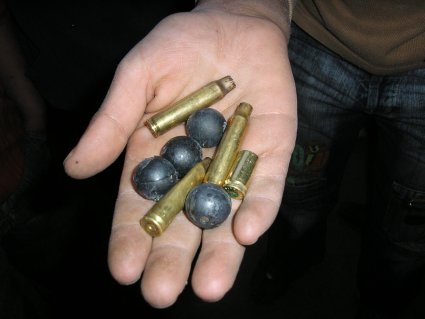 Rubber-coated steel bullets and empty live cartridges collected by HRWs from the scene. Note the small calibre shell – this does not come from the rifles that Israeli soldiers carry.

More soldiers poured out through the checkpoint and five returned, clearing their rifles’ magazines of the empty live cartridges. At 1.30 the Palestinian with the donkey was allowed to unload his milk. International HRWs were again refused exit by the soldiers but Palestinians were allowed out.

By 1.37pm five Palestinians had been detained at the Shuhada street checkpoint along with the donkey. When asked by a HRW, the soldier on duty said there was still “ongoing trouble” and that he would let people through as soon as things calmed down. They were finally let through at 2.10pm. Only the exit side of the checkpoint was working at this point, though Palestinians were being allowed through it in both directions.

Inside the Old City market, four Armoured Personal Carriers (APCs) were driving around. At 1.48pm one of them pushed a fruit stall backwards along the street and spilled the oranges. By 2.30pm soldiers were patrolling the street randomly stopping Palestinian men and forcing them to lift their shirts.

At 2.40pm six Palestinian youths stoned an APC that was driving through the area carrying shooting soldiers. A soldier jumped out, shot at the youths, jumped back in and drove away. Five minutes later more stones hit a stationary APC which eventually backed away.

Israeli soldiers inside the supposedly Palestinian-controlled H1 area of Hebron.

At 3.05pm six Palestinian youths threw stones at an army jeep from behind two burning tyres. The jeep drove around the area shooting at the protesters.

Israeli soldiers were moving along a street in the H1 area (which is supposed to be controlled by the Palestinian Authority) kicking parked cars. They were very abusive to journalists, both Palestinian and international. They screamed at them and tried to damage a car that belonged to one of them.

A soldier pointed his gun at a seven year old girl from about 300 feet away. She ran into her home scared. When she came back he shouted “sharmuta” (Arabic for whore) at her. He gestured dismissively at a HRW who said to him, “You just called a child a whore?”

“And your life is calling children whores?”.

One of the many tear gas canisters the Israeli soldiers shot.

Soldiers then shot tear gas at a group of women and children, including six HRWs. The soldiers laughed at the painful effects it had on them. They spent the next three hours driving up and down the street, laughing and joking. They shot tear gas directly at children, hitting one ten year old boy in the leg. He had been riding past on his bike at the time, clearly not carrying any rocks.

Overall, they shot off more than 50 canisters of tear gas, at least 50 rubber-coated steel bullets as well as a significant number of live rounds. 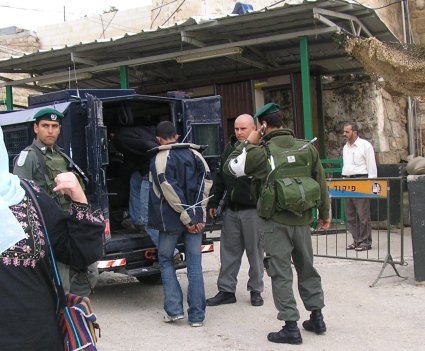 A Palestinian child taken away by Israeli border police near the Ibrahimi Mosque.

ISM Hebron also wrote a report from the second and third days of these protests.