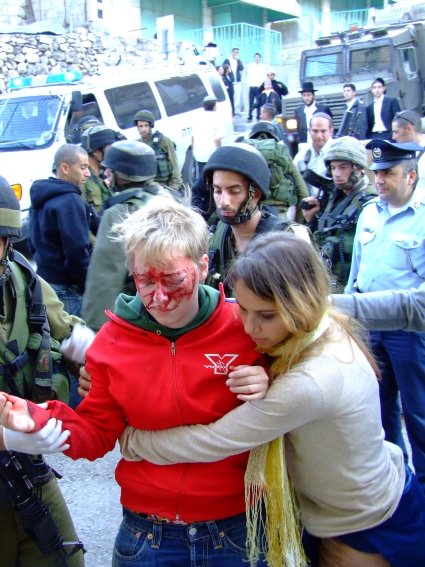 UPDATE, November 22nd: Tove has been released from hospital and will return home soon. The Jerusalem Post has reported Swedish government dissatisfaction with the Israeli investigation into the attack on Tove:

“The Swedish government is dissatisfied with Israel’s investigation of an attack in the contentious West Bank city of Hebron that left a Swedish activist with a broken cheekbone, the Swedish Foreign Ministry said Tuesday.

“We’re concerned that this hasn’t been followed up, and we intend to speak to the relevant authorities and ask for more information about the incident,” said Petra Hansson, a spokeswoman for the Swedish Foreign Ministry. ”

UPDATE, November 21: Tove is still in hospital where she will remain for the next few days before returning to Sweden to receive ongoing treatment there. As well as a broken cheekbone Tove has a fractured skull and damage to her eye muscles. A complaint was filed with the police in Kiryat Arba where eye-witness statements and photo evidence was submitted. However, according to a report by Israeli human rights group Yesh Din 90% of complaints filed against Israelis to the “Samaria and Judea District” police were closed without indictments being issued.

A 19-year old Swedish human rights worker had her cheekbone broken by a Jewish extremist in Hebron today. Earlier the same day at least five Palestinians, including a 3-year-old child, were injured by the settler-supporting extremists, who rampaged through Tel Rumeida hurling stones and bottles at local residents. Palestinian schoolchildren on their way home were also attacked. The Israeli army, which was intensively deployed in the area, did not intervene to stop the attacks.

Tove Johansson from Stockholm walked through the Tel Rumeida checkpoint with a small group of human rights workers (HRWs) to accompany Palestinian schoolchildren to their homes. They were confronted by about 100 Jewish extremists in small groups. They started chanting in Hebrew “We killed Jesus, we’ll kill you too!” — a refrain the settlers had been repeating to internationals in Tel Rumeida all day.

The soldiers, who were standing at the checkpoint just a few feet behind the HRWs, looked on as they were being attacked.

One settler then hit Tove on the left side of her face with an empty bottle, breaking it on her face and leaving her with a broken cheekbone. She immediately fell to the ground and the group of Jewish extremists who were watching began to clap, cheer, and chant. The soldiers, who had only watched until this point, then came forward and motioned at the settlers, in a manner which the internationals described as “ok… that’s enough guys.”

The extremists, however, were allowed to stay in the area and continued watching and clapping as the HRWs tried to stop the flow of blood from the young woman’s face. Some, who were coming down the hill even tried to take photos of themselves next to her bleeding face, giving the camera a “thumbs-up” sign.

At this point, a HRW was taken into a police van and asked to identify who had attacked the group. The HRW did this, pointing out three Jewish extremists who the police took into their police vehicles. However, the extremists were all driven to different areas of the neighborhood and released nearly immediately. When one of the three was released on Shuhada Street, the crowd that was still celebrating the woman’s injuries applauded and cheered.

A settler medic came to the scene about 15 minutes after the attack and immediately began interrogating the internationals who had been attacked about why they were in Hebron. He refused to help the bleeding woman lying on the street in any way.

Five minutes after the settler medic arrived, the army medic arrived and began treating the injured woman. When she was later put on a stretcher, the crowd again clapped and cheered.

Police officers at the scene then began threatening to arrest the remaining HRWs if they did not immediately leave the area, even though they had just been attacked.

The injured woman was taken to Kiryat Arba settlement and then to Hadassah Ein Keren hospital in Jerusalem.

HRWs were later told by the police that they had not even taken the names of those who were identified as having attacked the HRWs and that one of the main assailants had simply told the police that he was due at the airport in two hours to fly back to France.

The incident was the latest attack by extremist Jews in Hebron. The small group of Khannist settlers in Tel Rumeida regularly attack and harass Palestinians in the area. The violence sometimes spills over to the international human rights workers who accompany Palestinians in an attempt to protect them from settler attack.

The settlers in Tel Rumeida encourage Jewish tourists to come to support them, as a way of making up for their small numbers. Today, hundreds had come from tours in Israel for a special event — many from overseas: France, England and the United States.

For a more personal account of the same events, see this journal entry.