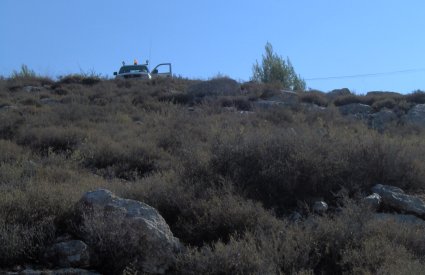 At 8am this morning two international Human Rights Workers (HRWs) accompanied a Palestinian family from the village of Azmut, just east of Nablus, to their olive groves. This land has found itself within close proximity to the illegal Israeli settlement of Elon Moreh, meaning that the family has been unable to harvest or cultivate this land for the past 8 years. Just 5 minutes after starting to harvest, a settler-operated “security” jeep pulled up a short distance further up the hill, and started screaming over a loudspeaker at the Palestinians, mainly in Hebrew with a little Arabic. One of the family told us he he had demanded that they “go back go back to [their] houses”. The villagers were visibly distressed, the village having long been subject to violence and intimidation from the settlers. With the settler in the jeep continuing to threaten us over the loudspeaker, the villagers left immediately. The two HRWs called the DCO (District Co-ordination Office, the civilian administration wing of the Israeli military in the West Bank) and asked for the Israeli police to intervene. Around 15 minutes later a border police jeep arrived and stopped next to the settler vehicle. However by this stage the villagers, accompanied by the 2 internationals, had retreated to a safe distance, and so it was not clear what the border police were going to do about the situation.

After the border police arrived the settler jeep remained where it was for about 10 minutes. There didnt seem to be much interaction between the police vehicle and the settler jeep; a police man appeared to say a few words to the settler(s) when they first arrived, but both vehicles remained next to each other on the top of the hill. The army certainly didn’t come to protect the villagers.

The villagers were unwilling to return without explicit assurances from the DCO that their protection from the Israeli settlers could be ensured. 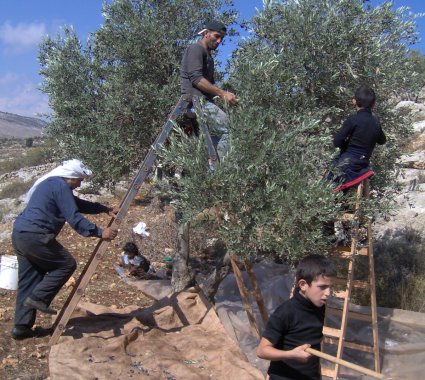 The Palestinian family decided instead to harvest some olives out of sight of the settlement, and the rest of the day’s harvest went ahead without incident. This one family alone has 90 dunums of land which they are unable to cultivate due to the proximity of this notorious Israeli settlement, leaving them with just 60 dunums.

The settlement’s colonist residents have been known to shoot at Palestinians attempting to pick their olives, and the army is complicit in this intimidation, the family told us. They regularly refuse to allow Palestinians access to their land, in contravention to Israeli High Court rulings. We were also told of several previous incidents of the army entering the village and assaulting its residents.

The HRW’s were also shown a stream running into the village. Although it previously provided the village with much needed water, it is now heavily polluted by a factory in the Elon Moreh settlement, and its chemical stench spreads over a considerable area. Despite all the setbacks and intimidation, the villagers of Azmut refuse to leave, and will continue this year’s olive harvest as they have done for many generations.