The Abu Haikals had heard that the settlers were planning to trespass on their land again for a Shabbat celebration. A Human Rights Worker (HRW) visiting in the Abu Haikal house called the District Co-ordinating Office (DCO) to ask what the plans were for this, since last weeks trespass had clearly been co-ordinated with police and soldiers and presumably the DCO. The DCO hung up several times and refused to answer questions. Eventually they said that they knew nothing about this.

Later at the house I noticed 2 soldiers on the garden path behind the house at 4:40pm. Looking closer I realized that there were also 4 adult settlers and a child standing at the top of the stairs next to the military post on Abu Haikal land. Another HRW began filming from below and pointed out that there were more settlers coming up the stairs from Tel Rumeida settlement. Soldiers made no attempt to stop them.

By 4:55pm 18 settlers had gathered around the military post and they all moved into the Abu Haikal orchard together. By 5pm there were 36 settlers in the orchard, just below the Abu Haikal house. They all faced away from the house, presumably to avoid being photographed. They began to sing and to pray. Later they were dancing.

At 5:10pm two settlers moved up the orchard towards the hole in the fence near the house. When they got there they discovered a squad of 6 soldiers patrolling on foot with a vehicle near the mosque. They turned back and rejoined the other settlers.

At 5:30pm I called the DCO again. Again they tried to hang up and initially were refusing to talk to an international. Iasked if they wanted to talk to Mrs Abu Haikal. They declined and said they could not discuss rumours of possible activity. The HRW pointed out firmly that this was no rumour. He was standing looking at 40 settlers right next to the house. The DCO said he would check this out and call back in 2 minutes. He never did call back.

I had noticed that there were no police present this week so he tried to call the police to get them to remove the trespassers. The police were not answering the phone and in the meantime the settlers all moved off the land together, down the stairs and went back into Tel Rumeida settlement. A few of them headed off towards Beit Hadassah settlement. 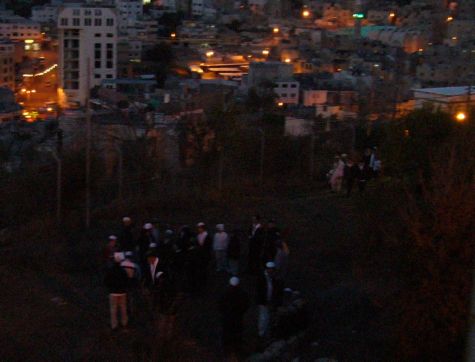