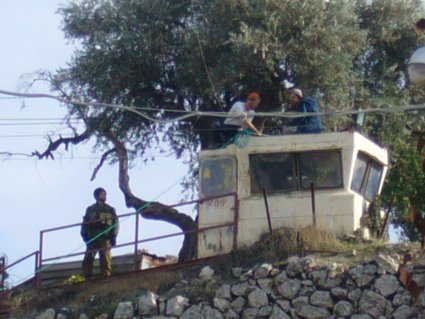 At 12 noon a human rights worker at the crossing on Tel Rumeida St. noticed that there were two settlers on top of the military outpost on Palestinian land next to a huge old olive tree. He photographed them.
He raised the alarm and asked the soldiers who told him that there was no problem and that they had all the relevant permits to run this new green electrical cable.
The Palestinian family who own this olive tree were terrified that these were preparations to cut the tree down but nothing further happened that day.

Human rights workers noticed that there were settlers in the Abu Haikal orchard next to their house. Two HRWs went to the house to talk to the family and began to film. Two others began to film from our apartment. As another HRW approached the land he noticed that two police officers had already stationed themselves on the Palestinian land and were quietly observing. Then he saw several young settler women approaching from the olive groves. He photographed and filmed them as they entered the Abu Haikal property through a gap in the fence. He called over to the police officers to ask them why they were allowing settlers to trespass on Palestinian land but they refused to answer. He moved next to the house where he could film the whole gathering. Most settlers were arriving from up the military stairs and past the military observation post through a gap in the fence at that end of the orchard. It now became clear why settlers had been running electric cables up to the observation post two days earlier “with all the correct permits”. They had been fixing up a powerful light so that the settlers could see the path through the fence.

About 80 settlers gathered in all, mostly quite young in their 20s. A group of men were dressed in black. They began to pray, to chant and to sing. It was very frightening for the family as they had been given no warning that this was to happen and it was not clear how things would develop. Some of the chanting was very loud and aggressive. This huge gathering was right next to the house where the family was gathered.

Two soldiers were patrolling back and forth around the house and one of them attempted to take photos of all the human rights workers and family members as they entered or left their house. Some of the family got very angry at this provocation. It seems the soldiers were trying to take revenge because HRWs often photograph them when they are harassing Palestinians.

After about an hour the settlers with very young children left and 15 minutes later everyone left. The group of young men in black stayed the longest, singing and dancing. It was very clear that this event had been planned in advance with the authorities and had active participation by the police and army.

At 2pm Abu Haikal family members heard machine noises on their land. They went to look and discovered a male settler clearing weeds with a weed-eater (strimmer) on the land behind the military post and olive tree, at the bottom of the garden wall. They called the police and after 15 minutes one of the daughters went to talk with the man and ask him to leave their land. Her aunt joined her. He ignored the request and attacked her with the weed-eater, hitting her on the ankle. He then phoned for help and five settler women came up the stairs including the deranged woman from Gaza. Two soldiers removed the Palestinians from their own land. They were then joined by 4 more soldiers.

At 3pm the settlers moved into the almond orchard (lot 52) and began to cut the grass and weeds in there. At 4pm the soldiers finally removed all the settlers from the land. By this time they had probably done most of what they wanted to do to prepare for the Sabbath celebration the following night.

The Abu Haikals had heard that the settlers were planning to trespass on their land again for a Shabbat celebration. A human rights worker visiting the Abu Haikals called the DCO * to ask what the plans were for this, since last week’s trespass had clearly been co-ordinated with police and soldiers, as well as presumably the DCO. The DCO hung up several times and refused to answer questions. Eventually they said that they knew nothing about this.

Later another HRW at the house noticed 2 soldiers on the garden path behind the house at 4.40pm. Looking closer he realized that there were also 4 adult settlers and a child standing at the top of the stairs next to the military post on Abu Haikal land. Another HRW began filming from below and pointed out that there were more settlers coming up the stairs from Tel Rumeida settlement. Soldiers made no attempt to stop them.

By 4.55 18 settlers had gathered around the military post and they all moved into the Abu Haikal orchard together. By 5pm there were 36 settlers in the orchard, just below the Abu Haikal house. They all faced away from the house, presumably to avoid being photographed. They began to sing and to pray. Later they were dancing.

At 5.10pm two 2 settlers moved up the orchard towards the hole in the fence near the house. When they got there they discovered a squad of 6 soldiers patrolling on foot with a vehicle near the mosque. They turned back and rejoined the other settlers.

At 5.30 the HRW called the DCO again. Again they tried to hang up and initially were refusing to talk to an international. He asked if they wanted to talk to Mrs Abu Haikal. They declined and said they could not discuss rumours of possible activity. The HRW pointed out firmly that this was no rumour. He was standing looking at 40 settlers right next to the house. The DCO said he would check this out and call back in 2 minutes. He never did call back.

The HRW had noticed that there were no police present this week so he tried to call the police to get them to remove the trespassers. The police were not answering the phone and in the meantime the settlers had all moved off the land together, down the stairs and gone back into Tel Rumeida settlement. A few of them headed off towards Beit Hadassa settlement.

* DCO – District Co-ordination Office, the civilian administration wing of the Israeli military in the West Bank.