Stones and fire in Kufr Qallil – yet the olive harvest continues

Omar Suleiman from Kufr Qallil walked through his 10 dunums of olive trees on Saturday the 30th of September, occasionally grabbing hold of a tree trunk and nimbly climbing up to inspect the higher clusters of fruit. He shook his head and gestured toward the empty branches here and there. Nestled on a slope between Berakhya colony and Huwarra checkpoint and military base, his olive grove is frequently invaded by Israeli colonists. They beat the trees to make the ripest olives fall to the ground in order to steal them, and also sabotage the harvest in other ways. About two months ago, they set fire to a 16 dunum large plot of land below the olive grove. Haj Suleiman’s family now have to trudge up a slope of desolate scorched earth in order to reach their land – an ugly reminder of the threat that the Israeli colonists of Berakhya present to their Palestinian neighbours.

Two years ago, the family was attacked by a group of Israeli colonists armed with machineguns. Haj Suleiman bears scars on his chin and scalp from big rocks thrown at him in unprovoked outbursts of colonist violence. When he attempted to defend himself by physically restraining his attackers, the Israeli military retaliated by forcing him and his family out of their house at two o’clock in the morning for five nights in a row – threatening the family members with violence and randomly breaking parts of their furniture. The family is now afraid to go to harvest their olives from the land closest to the colony. After having kept silent and submissive for a few years, the family have now had enough, and therefore decided to request international and Israeli accompaniment this year.

The first three days of harvesting in Kufr Qallil were relatively quiet, apart from an incident of theft from land on the south side of the road leading up to Berakhya colony. Israeli colonists were spending the eve of Yom Kippur bathing at a holy mountain spring adjacent to the road, some of them also having brought bags to fill with Palestinian figs and pomegranates.

On the fourth day of harvesting (Tuesday October the 3rd), an armored jeep full of soldiers arrived at the scene, shouting and motioning at the olive pickers to cease their work. They told the group – Haj Suleiman, his family and volunteers from IWPS and ISM – to pack up and leave as they had not obtained permission from the DCO (District Coordination Office) and were therefore not allowed to work the land on that particular day. Although the group argued that this order was unlawful and requested that the soldiers consult their higher commanders and the DCO before chasing them off the land, the soldiers insisted and threateningly escorted everyone back to the village. Afraid of retaliation, the family did not wish to directly resist the order but after hours of phone calls to the International Committee of the Red Cross and various levels of command at the DCO, it was ascertained that the order given by the soldiers was actually contrary to Israeli law and military policy, in light of recent judicial developments. 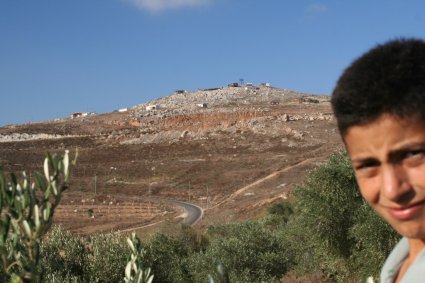 On 26 June 2006, the Israeli High Court of Justice issued a ruling in response to a petition regarding the right of Palestinian farmers, who are residents of the West Bank, to gain access to their land (H.C.J. 9593/04 Rashad Morar v. The IDF Commander for Judea and Samaria). In short, the court decision means that Palestinian farmers have a right to enter and work their land, with or without DCO permission, and that the military commander in the area must defend this right. In the past, Israeli military have often opted for attempting to stifle any violence on the part of Israeli colonists by declaring land a “closed military zone.” They have justified this by saying that the law is aimed to protect the Palestinian residents, but has in reality saved them from any real confrontation with Israeli colonists. The court ruling stipulates that this is no longer allowed and that territorial closure is subject to a number of strict preconditions.

This decision is crucial to many Palestinian farmers in providing them with a legal weapon to use in fighting for their rights to their land. Apart from land in “red zones,” which are not subject to such rapid status changes as “closed military zones,” and can be checked on military maps, all farmers should in theory be unhindered and protected in working their land and harvesting their olives this season. Tuesday’s events, however, clearly illustrate how this new policy, whether due to misinformation or malice, is not being implemented by soldiers on the ground.

It seems that the more senior and legally conscious echelons of the Israeli military are reluctant to inform foot-soldiers about the changes unless faced with farmers or volunteers who know the law and can argue their case. This was made apparent yesterday, as the DCO tried to dissuade Haj Suleiman from harvesting his olives on the day he wanted, instead suggesting a later date more suitable to them. Despite this, the family continued harvesting, their numbers boosted by international and Israeli volunteers, the latter from Rabbis for Human Rights and other anti-occupation organizations. The Israeli military were also present, although this time as protection from Israeli colonists.

Despite manipulation and lies from the Israeli military and the DCO, the olive harvest continues. We urge all internationals to do their utmost to come to Palestine in solidarity with farmers who have been denied safe and unconditional access to their land. Harvesting is resisting.

Footnote: Wednesday night, more violence befell the village of Kufr Qallil, when 40 year old Nasir Hasan Mansur was shot by Israeli military. Mansur was sitting in front of his home when the soldiers fired north from Beit Ur checkpoint, hitting him in the left foot.

For another account of the fourth day of the picking (October 3rd), see this report on the IWPS site.

A reporter from The Times in London joined ISM, IWPS and Rabbis for Human Rights volunteers for one of these picking days. His report, focusing on the Rabbis, is published on the Times website.