September 29, 2006: Today, in the village of Al-Jab’a, Palestinian villagers, supported by Israeli and international activists successfully removed a large section of an illegal roadblock that had been installed by the Israeli army. The Palestinians were able to achieve their objective: creating a passage wide enough to allow for a service taxi (a mini-bus sized shared taxi: they at as the mainstay of public transport in the West Bank). While work was still going on, Israeli army arrived and assaulted Palestinian, international and Israeli activists.

A group of Palestinians, along with their Israeli and international supporters joined together at the junction between the villages of Al-Jab’a and Surif to remove the earth mound roadblock that prevents cars from passing between the villages – nearly 100 people altogether. The roadblock prevents school children in Al-Jab’a from reaching Surif. It also prevents farmers in Surif and Al’Jab’a from reaching their land via tractor, while similarly preventing the transport of crops from the fields to the market. The roadblock effectively closes the road in two directions, and service taxis are prevented from waiting to pick up travellers. Fed up of these restrictions aimed against the Palestinians, for the second time in eight days, the people assembled to dismantle the obstruction. On September 21, the villagers carried out a similar action and began the work to remove the roadblock.

The demonstrators marched from the village of Al-Jab’a, following Friday prayers, and assembled at the blockade. The Palestinians carried signs reading “I Dream of Freedom for My Children,” “Settlers Create Apartheid” and “You Steal Freedom,” while others carried Palestinian flags. When the demonstrators reached the roadblock, they began removing it with shovels, hoes, picks and their hands. Rocks were passed hand to hand, the rubble that formed the base of the mound was moved by shovel, and others began to dig underneath the two ton concrete block that was to be moved. After the stones and dirt had been partially removed, and the base of the block exposed, ropes and straps were attached to the block, and a large lever was angled underneath to help lift. Using the strength of over thirty people, the block was moved inch by inch. Some demonstrators pushed the block from behind, and others pulled on the ropes. In minutes, the demonstrators were able to roll the block five times, clearing a path for cars, trucks, pedestrians and donkeys. With the block removed, and the rubble cleared, the hole created was nearly 9 feet (3 meters) wide. 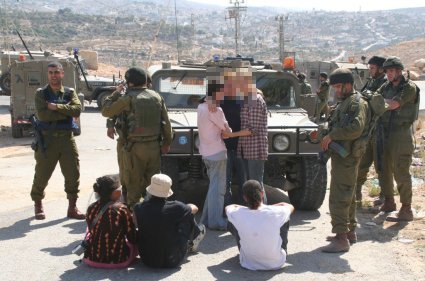 Following the four unsuccessful attempts to seize demonstrators and equipment, the soldiers entered the clearing leading to Surif and chased an Israeli activist who was returning the tools to their owners. The IOF soldiers assaulted the activist, and quickly international activists with the Palestine Solidarity Project (PSP) intervened. During this encounter, the IOF soldiers repeatedly assaulted international and Israeli activists by choking them, punching them, striking them with the shovels and knocking them onto the ground. While the four soldiers attacked the demonstrators, one shouted in English, “I am going to beat her…I am crazy.” During this attack, four activists were injured. While seemingly departing, one soldier, in his rage destroyed a protest sign held by a Palestinian child.

Less than one hour following the demonstration, an military bulldozer, made by US company Caterpillar was dispatched to rebuild the roadblock. This reaction by Occupation forces was expected. The demonstrators knew that their action would not open the road permanently – it was an act of resistance against the Occupation’s policy of closure and restriction of movement. While the roadblock was open for only one hour, during that time, the demonstrators witnessed several families, individuals and farmers riding donkeys, pass through the opened roadblock.