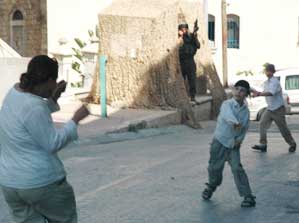 On August 5th, two Human Rights Workers (HRWs) from Denmark were sitting on Shuhada Street in Tel Rumeida. At around 2:45 PM a Palestinian boy, around age 15, wanted to use the stairs at the end of Shuhada Street, opposite the Beit Hadassa Settlement. A group of six settler children, around ten years of age, were hanging out next to the stairs. A Palestinian boy asked the HRWs to accompany him. The settlers tried to trip the Palestinian and the HRWs and kicked one of the HRWs from behind. One of the internationals accompanied the Palestinian all the way up the stairs, while the other stayed at the bottom of the stairs. When the HRWs descended the stairs and went back onto Shuhada Street, one of the settlers kicked one of the internationals on the back of her leg and threw a rock at her neck. Only one soldier was present in the military post opposite the stairs. He yelled at the children and ran towards them, and they backed off.

Around 3:20 PM two elderly men wanted to descend the stairs. A group of about ten settlers blocked their way at the end of the stairs. The soldier told the settlers to leave, but they refused. Two settlers around eight to ten years of age and one teenager, around fifteen years old, hit the elderly men with sticks, and other children threw rocks at them. One of the HRWs began screaming very loudly and ran towards the settler boys, while the other HRW started video taping the attack. The HRWs called the police, but they did not answer. The soldier told the attacking settlers to leave and called the police. The settlers still did not stop. 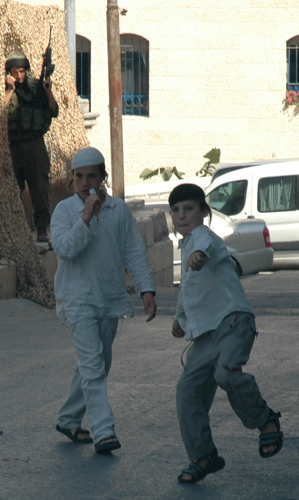 Four more HRWs came down to Shuhada Street. As the elderly men were leaving, the settlers began throwing numerous rocks at the HRWs. At this point, around 25 settler children and teenagers, between the ages of 8 and 14, and one adult settler woman were present. One American HRW from the Tel Rumeida Project was hit with a brick-size rock in her back and two other HRWs were lightly hit on the legs. At least three TIPH members arrived and observed the situation. The entire attack on the HRWs is recorded on video tape. 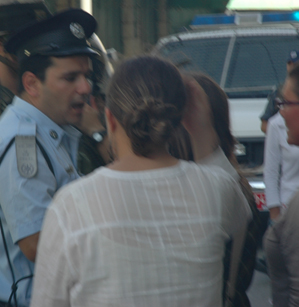 At 3:46 pm the police arrived and the attacks stopped. The adult settler woman told the police that the HRWs had entered the Beit Hadassa settlement and were causing problems. The soldier present during the entire incident said that it was not true. One police officer, who the HRWs recognize from daily interactions while on the streets, wanted to hear their version of the story. However, the head border policeman told the HRWs to leave Shuhada Street or he would arrest all of them. The HRWs attempted several times to talk with the head border policeman, but he refused. Since there were no Palestinians in the area, the internationals left Shuhada Street. During the interactions with the police and soldiers, settler girls under the age of 12 stood next the HRWs and mimicked their words and body language.

Around 6:00 PM, the HRW who was assaulted with the brick-size stone was again sitting on the street, this time at the top of the hill. The soldier who was present during the attacks on Shuhada Street stopped by and asked her, “Are you OK? Are you injured?” The HRW told the soldier that her back was hurting. He said that the boys were very stupid and bad, and then apologized for her injury. He then said that he wasn’t allowed to do anything about the settler boys.