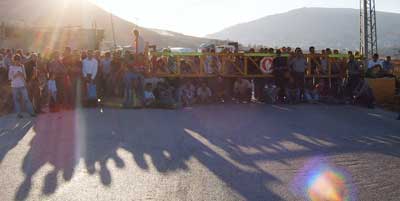 After an exchange of fire between Palestinian resistance fighters and Israeli military on one of the apartheid roads connecting Israeli settlements north of Nablus, the Israeli military retaliated by collectively punishing Salim and other surrounding villages. About 15 Israeli jeeps entered the 5 500 person village of Salim, completely closing all entrance and exit to the village and interupting the festive preparation to the evening’s wedding party.

All the roads around Salim, including the dust paths ordinarily used by people to get around sporadically closed checkpoints, were blocked by military at around three o’clock in the afternoon and no one was allowed in or out of the village. Some frustrated people decided to try and cross over the open fields, with varying results. Several vehicles carrying people, all tired and hungry after a hard day at the office, were turned back at gunpoint. 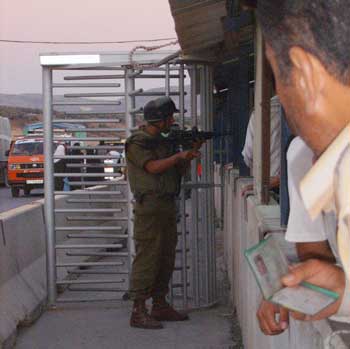 The major checkpoint at Beit Furik was also completely closed, affecting the inhabitants of not only Salim but of several villages in the area. The soldiers there initially promised to let women, children and sick people through, but were then given stricter orders by their commanders and closed the checkpoint completely. After some negotiation, women with very
young children and the ill were allowed to pass. A large crowd of about
100 men were, however, forced to wait for almost four hours before the
checkpoint was opened to them at about half past seven.

The elderly men of over 50 years of age were initially denied passage unless they backed away from the checkpoint and stood behind the metal barrier used to stop cars from driving through. The soldiers were, however, forced to stop this ridiculous order, seemingly purely designed to humiliate, since everyone decided to ignore it.

The roads around Salim were closed until around nine o’clock in the
evening, when the Israeli military finally left. Undaunted by this kind of
recurring interruption to their daily lives and trains of thought, the people of Salim are expecting the wedding festivities to go on all night.