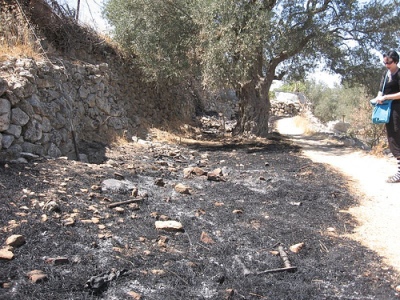 On Saturday August 26th, at approximately 12 noon, a Palestinian family in Tel Rumeida, (in the Israeli controlled H2 district of Hebron) noticed a group of settler boys setting fire to the dry grass in front of their home. This land contains many olive trees and settlers have attempted to burn down these trees on many occasions by starting grass fires. The family put the fire out with water but the kids returned and started a fire which spread to the center of a large olive tree. By the time the family noticed, the fire was so hot that they could not put it out by themselves. Phone requests to the DCO (District Command Office of the military) to allow firefighters from the Palestinian municipality of Hebron to enter into H2 to put the fire out were denied.

The family tried to solicit the help of soldiers who poured a white, firefighting powder on the burning tree. This attempt at putting the fire out was not successful and eventually the whole tree was destroyed. Soldiers attempted to charge the family 600 shekels ($135) for the firefighting powder and the family refused. The soldiers threatened to come back and confiscate the family’s television is they refused to pay. 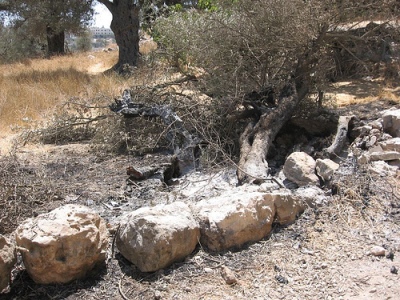 In addition, settlers set the ground on fire in another location next to this same family’s house. No olive trees were destroyed in this fire.