Israelis Arrested for Blocking the Road to Air force Base 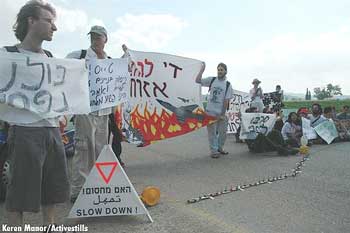 The group issued a press release stating their motives which is translated below:

The international law requires of every human being the duty of resistance to war crimes using every possible means. At this moment, when the rockets are falling, the war crimes are committed, the victims buried, it is time to fight to stop the war.

It is the duty of every soldier to refuse to serve orders which are war crimes. The support by the Israeli people of this criminal government means they are participants in committing these war crimes.

The number of dead is continuously increasing. The attacks by Israeli air force are planting death, destruction and hate. In Palestine, the occupation continues killing and torturing Palestinians. The civilians of Northern Israel are used as human shields and are paying their lives as a price to serve the ego of generals who are even unable to acknowledge failure and defeat.

The war crimes are committed everyday, hundreds of kids have been killed. The number of those killed is over a thousand. There are tens of thousands of injured and over one million refugees and Israel continues the air strikes, the killing, the destruction, and the annihilation in order to prove who is powerful in the region.

We repeat and we say what is known for everyone; there is no military solution. We are calling on the Israeli government and its people to wake up and behave in a moral way.

We must stop the war machine and the destruction. we demand an immediate ceasefire, an exchange of prisoners, and the release the political prisoners in Israel.