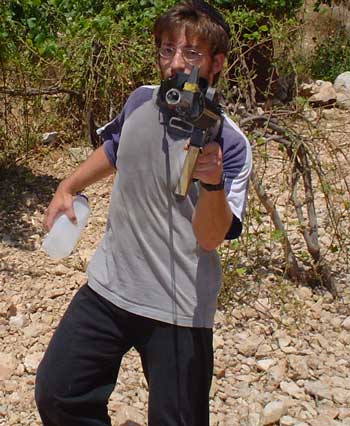 On Wednesday, July 26th, at approximately 1:30 pm, a group of internationals went with the farmer Abu Jabber Soleiby to document the most recent damage to his land by settlers from the nearby settlement Beit ‘Ain. The settlers from Beit ‘Ain have been bringing their sheep down the steep hill to graze from the settlement onto Soleiby’s land. As the group of three internationals and two Palestinians including Abu Jabber and his brother approached Soleiby’s land, they noticed at first one sheep among the trees. It was then observed that an entire flock of approximately 15-20 sheep were on Soleiby’s land and were clearly destroying the trees and grape vines.

The sheep were accompanied by two male settlers, one of whom was armed with a large automatic rifle. The group approached the settlers and demanded that they take the sheep off the land immediately. Internationals took pictures and filmed as the Palestinian men herded the sheep -and the settlers- back towards the settlement. As one international woman was taking pictures of the armed settler, he turned and raised his gun to her head from 12-18 inches away. Other than this particular show of force, the settlers were clearly outnumbered by internationals and Palestinians and allowed themselves to be escorted off of the land with little direct confrontation.

In the past, settlers from Beit ‘Ain have beaten and shot at Abu Jabber and his family, cut down limbs of trees, burned trees, and dammed up the small stream that provided the irrigation for his land by rolling large boulders down the hill from the settlement into the water. The nearby larger settlement, Gush Etzion also controls the piped water to the area (including some Palestinian homes in Beit Ummar) and had cut the water off for the previous three days. 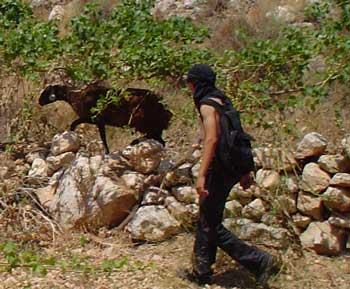 Abu Jabber attempted to file a complaint with the Israeli police stationed in Gush Etzion the next day, but when he arrived he was told that the settlers were free to do whatever they want and refused to take his statement (this would have been the ninth complaint filed by the Soleiby family about the actions of settlers from Beit ‘Ain).