Israeli Stranglehold on Palestinian Farms in the Jordan Valley 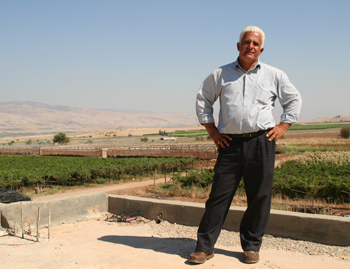 11th July: Near the villages of Az-Zubeidat and Marj Na’ja is the farm of Abu Rhader, 49 years old. ISM activists met with the farmer, as well as his neighbor, Abu Jamal, 48 years old. Abu Jamal is one of many teachers and civil employees to be left unpaid for five months following the US-led economic sanctions pressuring the new Palestinian government.

Basem Ahmed Abu Rhader was born in Tobas, and his lifetime has seen twenty-nine Israeli settlements built in the Jordan Valley, while life for farmers is put under ever greater pressure. He is one of the last significant landowners, his peers having been gradually “persuaded” to surrender their land, while settlements grow verdant orchards on all sides. While these colonies grow, Abu Rhader is prohibited from making the simplest renovations, let alone new buildings. His farm is located 400m inside the 1967 borders of the “green line.”

As well as annexing land, the Israeli authorities use other means to pressurize his operation. He is an able businessman, and he knows that he cannot grow more than he can sell in the West Bank or in Israel. However, the long journeys inflicted by checkpoints and terminal closures mean that his produce may simply rot before it can be sold. He has no access to processing plants that could make the produce more long-lived or marketable. If the produce reaches Israel, he may yet be charged 200 NIS for the pleasure of being told it is unsuitable to sell, which is an insult to any farmer.

This means that many of his green houses stand empty and fruits rot on the plant, because it would cost too much to produce at full capacity. Abu Rhader grows numerous types of vegetable and some citrus fruits. Soon he will begin harvesting his corn. How much will be able to reach markets remains uncertain.

In the historically fertile land of the Jordan Valley, this predicament is not only one for the landowners, but for whole communities. Abu Rhader has been losing approximately $1,000,000 per annum for four consecutive years. Thus, where he once regularly employed fifty to sixty workers, now he retains between seven and ten only. He cannot offer homes to workers or their families, and those that come must be able to afford to come by road. As with so much of Palestinian life, the occupation is straining agricultural society to its limits.

As well as economically strangling the farms, the Israeli military is also guilty of general harassment and intimidation, which they conduct with impunity. He gave this example: an Israeli bulldozer may appear one day and destroy a tract of land, destroying $1,000 worth of crops. He has the option of suing for compensation, but legal representation would likely exceed $10,000.

From the roof of his farm building we surveyed the tracts of empty land. Abu Rhader’s son is studying Human Rights Law in Sydney, Australia. He will perhaps be well-equipped to write his dissertation on some of its failures.

The Jordan Valley region starts north of the Dead Sea going north all the way to the city of Bisan and is surrounded by the east by the Jordan River and on the west by the mountain ranges of the West Bank.

The Jordan Valley is home to over 50,000 Palestinians and accounts for approximately 30% of the West Bank territory (Dearden, Nick; Israeli Crime in the Palestinian Jordan Valley)

Plans for the eastern section of the Wall to run through the Jordan Valley will isolate over 20 villages while additional barriers will encircle Jericho into an isolated prison. Thirty kilometers of the 45 km stretch from Salem to Taysir are currently under construction. The Ministry of Defense states that this section will be completed by the end of this year.

Orit Arzieli, head of the Jordan Valley “communities board”, said Israel may be limiting the expansion of the Palestinian communities in the area: “This is true, they should not be here. There is a constant trickling of Arabs from Nablus who want to populate the valley,” she told AFP. “The Jordan Valley must stay under Israeli control.”

For more background see Israel closes off Jordan Valley: The Allon Plan of 1967 is Nearly Complete, from semitism.net