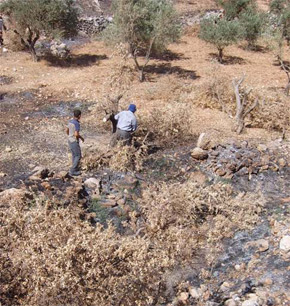 On Wednesday, July 19, 4 volunteers from then International Solidarity Movement accompanied a farmer from the village of Al Jab’a whose fields had been burned by settlers. Al Jab’a is a small farming village located in the shadow of the Gush Etzion settlement bloc. The settlers from a settlement outpost, Beit Aien, are responsible for starting two fires in recent months to farmers’ land in Al Jab’a that have burned olive trees and other arable land.

In addition to burning land, the settlers drain waste water from the settlement, that sits on top of a small mountain, to the farmers’ land in the vally. This water has poisoned many trees so that many are brown and dying.

The farmer needed to cut dead limbs off the trees in order for new branches to grow, but feared harrassment from settlers. The settlers of Beit Aien live a short distance from his land and have threatened him and his workers with guns on several prior occasions. The day was successful, nevertheless, with no appearances by the settlers and a large amount of work completed by the farmer and his workers.

On July 24th, people from Beit Ummar, Halhul and Hebron, and internationals marched against the ongoing war in Lebanon and Gaza. About 400 people were gathered of Halhul in protest of the disequilibrial war between Israel and Hezbollah.