by Em and Zadie in Beit Ummar 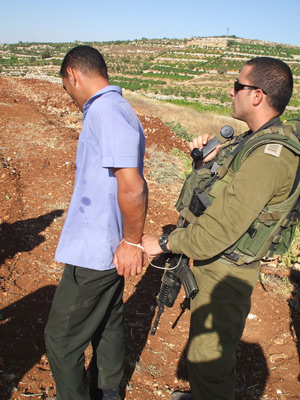 UPDATE, 6th July: As far as we have been able to acsertain, Musa Abu-Marya still remains a captive of the Shabak.

Yesterday in Beit Ummar, a village of 15,000 in the Israeli occupied West Bank, non-violent direct action continued in opposition to the illegal Israeli annexation and destruction of Palestinain farm land. Surrounded by cautious Palestinian youth who observed from a safe distance, a group of 2 Palestinians and 9 internationals approached a backhoe and bulldozer uprooting trees in Palestinian orchards. The demolition, begun on Sunday, is to make way for a new Israeli wall encircling the settlement of Kurmei Tsur and will conveniently -and illegaly- steal yet more land from the bordering villages of Beit Ummar and Halul for the Israeli settlement – itself illegal under international law. The prospective wall will be built 300 meters from an existing one, grabbing land without the permission or compensation of Palestinian land-owners.

Upon arriving within thirty meters of the construction equipment the activists were chased and assaulted by approximately 15 members of the Israeli Offensive Force. Activists were strangled, punched, kicked, and struck with the barrels of guns by these soldiers, causing bleeding, numerous bruises, and difficulty swallowing. One activist had hair ripped from his head. Another had a soldier’s finger stuck in his eye in an effort to incapacitate him. Another was kicked in the groin. At one point, a Palestinain activist and journalist asked a soldier “why do you attack civilians? is this what you are trained for?” In response, a seething soldier declared “You are my enemy”, which the Palestinian caught on camera.

Four activists were restrained and put in plasti-cuffs. But three, all internationals, were allowed to leave, while the other detainee, Musa Abu-Mariya, a Palestinian from Beit Ummar, was arrested and taken for indefinite interrogation, highlighting the apartheid nature of the Israeli legal systems. After prior arrests by the Israelis, Musa has reported physical abuse by his captors.

Later in the morning another Palestinian, a 15 year old named Asim, was arrested in a nearby orchard. According to reports from villagers in Beit Ummar he sustained injuries from the IOF.

Advocate Nasser, a lawyer representing the municipality of Beit Ummar and Halhul succeeded in getting a temporary stop work order from an Israeli court. The mayor of Beit Ummar presented the soldiers with the order, forcing a temporary halt in the destruction and theft of about 5000 dunams of farmers’ land. The order says that they must stop all work on building the wall around Karme Tzur settlement until there is a decision in the Isreali Supreme Court on the lawsuit filed by the village of Beit Ummar against the construction.

One of the Palestinians arrested yesterday was released last night, fifteen year-old Asam Abu Mariya. Non-violent activist, Musa Abu Mariya, 28, is still being held at an unknown location and has had no contact with any lawyer.

For the past three days Palestinians and internationals have had some success at stopping the destruction of the land by sitting down in front of the bulldozers and demonstrating on the land. However, hundreds of trees and grape vines have been already been uprooted. The Israeli army has used force to stop the protestors and enforce the confiscation of land while bypassing all legal channels. There are various lawyers working on enforcing the rights of the landowners and protecting the land from confiscation.