Visiting Your Neighbours in Tel Rumeida 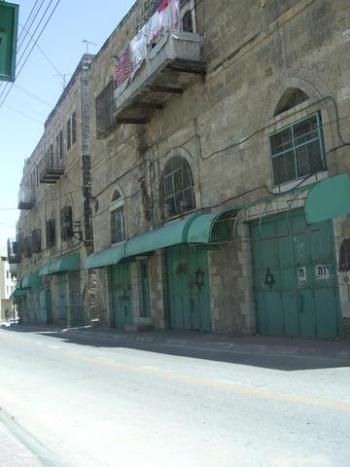 On June 4th at approximately 3:30 pm a delegation from France came to Tel Rumeida to learn more about the situation here. We met with them at the Tel Rumeida community center and I told them a bit about our work here. After we all talked for a bit, a man who lives directly across the street from the Tel Rumeida settlement invited the delegation of about ten people to visit his house. No one is allowed to even go near this house unless they actually live there (meaning Palestinians or internationals). Settlers, of course are allowed in this area which is about half a block from where I live.

We could have predicted what happened next of course. The soldier on duty at the top of Tel Rumeida hill refused to let the delegation go to the man’s house. I kept back and did not intervene because I wanted to give the French people a chance to experience for themselves the ridiculousness of the situation. However I can guess at the reasons the delegation were told why they were not allowed to visit the man at his home.

So in the end, even with all the French passport waving and the French insisting that they were politicians and diplomats, the soldier did not give them permission. So I guess they are going to go back to their country now and write about how they got to witness first hand the racism that governs Tel Rumeida. Hopefully this will be more fuel for boycotts and a nail in the coffin for the settlements in Hebron.

Can you imagine not being able to visit your neighbor who lives half a block away because it will provoke the people who live near him?