Palestinian Shepards “Tear down the wall”

Palestinian protetors in Mnezel, South Hebron hills, built a passage over a wall built on their land using rocks. They piled the rocks on both sides of the wall despite threats from the border police that they would force them to stop. The protestors succeeded and a shepard was able to bring his flock of sheep over the wall

About 120 people gathered for the demonstration including women and their children who were chanting and many children carrying signs calling for no wall and no settlements. A young man from Mnezel in a non violent direct action drove his tractor to the wall and used it to push on the wall to open it. The border police, army, and Israeli civilian police forced him to stop.

The people of Mnezel joined by people from Tuwani, Yatta, Qawawis, and Beit Ummar, international and Israeli activists began a demonstration protesting the inner wall. This wall, which is 80cm high, separates them and their sheep from free access to their land and other
villages.

The wall also separates the people of Mnezel from hospital and educational services, which are in Yatta. To reach them now they must travel very far around a checkpoint or pass through an opening in the wall near a settlement and risk harrasment by settlers.

In another part of the demonstration, people of Mnezel raised their concerns about the wall to the DCO commander, who was present. According to the commander, the DCO would agree to open a spot on the wall tomorrow if it appears on the map the DCO previously distributed. He added that he would request from his officers to have an opening in this place in case there isn’t an opening on the original map of the DCO. 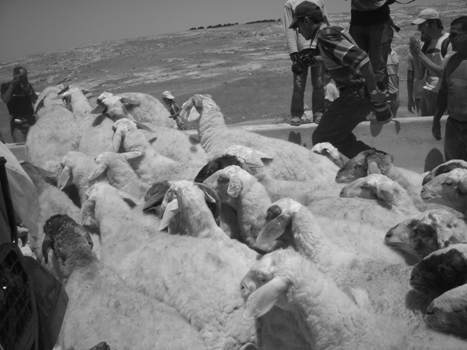 In two days he promised to come back and report to the people of Mnezel the decision of the DCO regarding their demands. As a temporary solution during this period of waiting, he asked for the people’s ID cards so that they will have an easier time of passing the checkpoint.