Residents of Shofat refugee camp in Jerusalem, along with international and Israeli supporters, today demonstrated non-violently against the Israeli Border Polices’ often violent suppression of the camps residents’ right to cross the checkpoint at the camp entrance to pray in Al-Aqsa Mosque on Fridays. 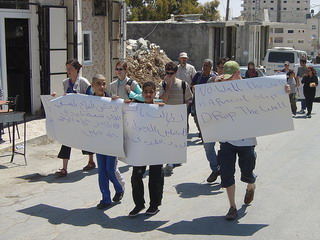 Palestinian men women and children marched peacefully alongside Israeli and international activists to the checkpoint carrying banners declaring their right to worship at Al Aqsa Mosque and protesting against construction of the Apartheid Wall next to the Camp.

Upon reaching the checkpoint Border Police and soldiers, including two mounted officers, attempted to physically block the marchers’ progress. The residents’ leaders asked the Border Police commander why they could not pass and complained about the denial of a basic human right. Unprovoked by any aggression on the part of the demonstrators, the Israeli forces resorted to using sound bombs and tear gas. 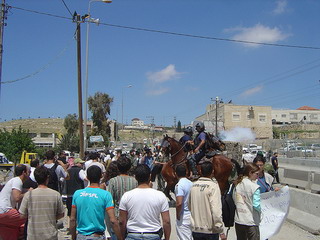 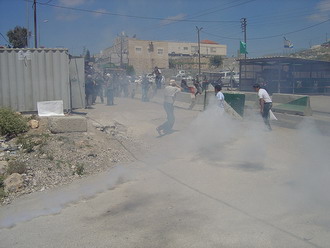 Scared but undaunted, the Camp residents continued to press their right to worship and accompanied by Israelis and Internationals over 60 people were able to make their way past the checkpoint, despite continued harassment by the Border Police 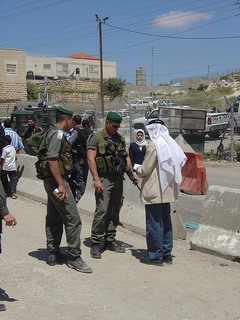 Local resident Ibrahim said: “I am grateful for the people who joined with us today. It’s a first step and we will continue to demonstrate as long as they treat us this way. Today, they held back because of the presence of press and internationals, normally they are asking 10 yr old boys for documents or will not let them pass [documentation is not issued by Israeli authorities to Palestinian children until age 13] and they always treat worshippers brutally. They refuse to let buses through so the people have to go by foot whether it is hot or raining. It’s real suffering every day”