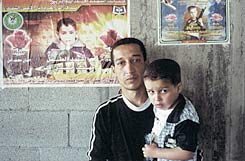 The entire family of Hamdi Aman, a 28-year-old Palestinian from Gaza who spent his youth in Tel Aviv’s Carmel market, was hit in the assassination of Islamic Jihad operative Mohammed Dahdouh in Gaza a week and a half ago.

Aman’s 7-year-old son Muhand was killed; Naima, his wife, 27, was killed; his mother Hanan, 46, was killed. His three and a half year old daughter Mariya is lying in the pediatric intensive care unit at Sheba Medical Center, Tel Hashomer, permanently paralyzed and on a respirator. Aman is not allowed to be with her.

His youngest son, Muaman, 2, was lightly wounded by shrapnel in his back, and Aman himself was hit by shrapnel throughout his body. His uncle Nahed, 33, a father to two toddlers, is fully paralyzed and in critical condition at Tel Aviv’s Sourasky Medical Center.

The Amans had bought a used Mitsubishi car 11 days ago, and took it for a maiden spin through the Gargash neighborhood in Gaza City. There were eight of them in the car: five adults and three toddlers. Mariya stood dancing on her mother’s knees. When they drove down the busy industrial street and passed the home of Palestinian Authority Foreign Minister Mahmoud Zahar, they felt a powerful blow to the left side of the car exactly when a Magnum van carrying Dahdouh passed them on the left. A massive blast occurred, the van with the dead Jihad operative in it was in flames, and Hamdi was faced with the horror that his entire family had been hit.

Israel Air Force chief Major General Eliezer Shkedi said the next day that “we still have to check” what killed the Aman family. The IDF Spokesman’s Office also told Haaretz this week, 10 days after the assassination, that the IDF is “continuing to investigate in order to check the report that three Palestinians were killed as a result of the attack on Dahdouh’s car.”