from The Stanford Daily

Two young human rights activists spoke last night about the Palestinian population of Tel Rumeida, Hebron, a West Bank neighborhood that also contains some of what were considered the most fanatical Israeli settlements. The event’s sponsor, Stanford’s Coalition for Justice in the Middle East (CJME), brought the co-founders of a fledgling human rights project stationed in Tel Rumeida, 24-year-old Chelli Stanley and 35-year-old John Harmer, to campus as the group observes Palestinian Awareness Month.

The lecture, entitled “Tel Rumeida: Life Under the Occupation,” was the first in a series of related events extending into early May. Yesterday’s lecture — which also featured footage captured by project volunteers in the neighborhood — precedes a second lecture on Thursday at 7:30 p.m. by Palestine’s Deputy Ambassador to the U.N. Riyad Mansour in Cubberley Auditorium. 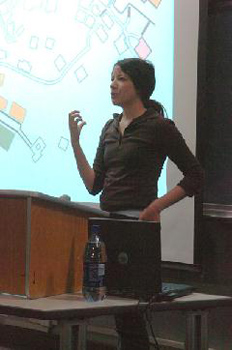 Stanley, originally from Maine, is a sociologist whose vision to establish the first permanent international presence in the neighborhood coincided with that of artist John Harmer. Harmer’s previous work examined the military industrial complex through sculpture.

Yesterday’s joint lecture, accompanied by a slide presentation, enumerated the ways in which the speakers said Palestinian residents of Tel Rumeida were terrorized — witnessed and documented by the speakers — by two bordering settler communities. The speakers related anecdotes of torture and abuse.

“One morning, a Palestinian boy was leaving to go to school and was surrounded by five adult male settlers, one of which put a battery operated power drill to his chest,” Stanley said. “This is a tactic they’ve been using against the children in the neighborhood.”

The boy survived and was not hospitalized, but the psychological impact of the act, Stanley suggested, breeds fear in the neighborhood’s dwindling Palestinian population.

Another story detailed the abuse of a small child.

“A female Israeli settler used a rock to pry open a young Palestinian boy’s mouth. She used the rock to grind down the child’s molars,” Stanley said.

The speakers named what they called the settlers’ other staple methods of abuse. They allegedly included stoning, arson, beatings, destruction of property and violence inflicted by even young Israeli children.

“Israeli settlers have found a loophole in the law that states that no one under the age of 12 can be held responsible for their actions. The attacks that appear in the most visible areas are often initiated by very young boys and girls,” Harmer said.

He explained that though many of the attacks are executed by children who are exempt from the law, violence perpetrated by adult men and women settlers is common and is in no way impeded by the local Israeli police and military.

In fact — the speakers suggested — the oppression Palestinians face in Tel Rumeida is exacerbated by the favoritism of the local Israeli military presence. The activist group reports that, though soldiers are bound by law to protect every individual in the neighborhood, violence against Palestinian residents is apparently openly tolerated.

To illustrate this point, Stanley related a tragedy in which a Palestinian woman lost two unborn twins during an attack by settlers. According to Stanley, the woman shouted repeatedly for help to nearby soldiers to no avail, and finally resorted to calling the Israeli police. Her son was attacked while the police refused to come to her home. Finally, after hearing the death threats screamed over the phone, the police arrived after a long delay. The woman later miscarried both of her twins and was forced to take a long detour around hostile settlements to reach a hospital.

Harmer claimed that the Israeli police in this area — who have come under fire from Israeli officials for their discrimination of Palestinians — often hang up on Arabic callers before their complaints or emergencies are relayed.

Both speakers began visiting Tel Rumeida in 2005, where they were immediately exposed to the daily life of local Palestinians. The speakers believed their observations warranted documenting, so throughout 2005 the activists filmed incidents of violence which will be compiled into a documentary in two to three months. Many of the clips are available on the Project’s Web site, which allows viewers to download the materially freely.

During their stay in Tel Rumeida, Stanley, Harmer and other international human rights workers acted as human shields against assailants, accompanying Palestinians through the streets and attempting to ward off attacks.

“We get in between the settler and the person being attacked. We scream at them and videotape the attack. With these settlers we know that we’re not going to stop the violence so we just try to redirect the attacks on ourselves,” Stanley said.

Stanford was just one stop along a circuit of destinations for Stanley and Harmer, who are touring the United States to raise funds for the Tel Rumeida Project and recruit new volunteers. The project seeks to raise $20,000 in the United States, which will be matched by a human rights agency. Most of the funds will go toward buying new video cameras for the project.