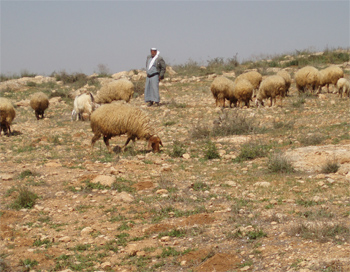 I arrived in the village Tuesday 11th of april.

12.4.06 In the morning I go with Hadj Mahmoud, who takes his sheeps for grazing on the hillside opposite the settlement of Susya. After some time we see a settler car on the road gong up to Susya and he is probably watching us. After 20 minutes the car drives down on the main road together with an army truck. 3 soldiers walk the about 70m up to us. I go a few steps towards them and say ‘welcome’. A soldier asks me what I am doing here, and I tell that I am a guest in the village and that I have come from Denmark to tell the truth about the Muhammad drawings. They seem a little confused and talk together for a minute or so. Then the soldier says that I should tell Mahmoud that he is not allowed to graze his sheep on the side of the hill turning towards the Susya. I say that he was only on the ridge and the soldier answers that I just should tell him that he has to stay on this side, because he is not allowed to come so close to the settler road. (The distance was about 300 m), I say Mahmoud only speaks Arabic but I will try to explain it to him. The soldiers leave. The settler drives his car back to the same place and continues watching us for the next half hour. Then he leaves. 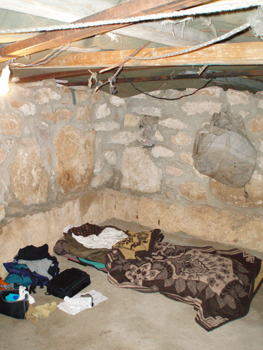 A little detail that tells something about the psychic element in the situation. Mahmoud has discovered some rusty peace of iron in a bunch of soil and stones (a demolished stone house?) about 30 m on the forbidden side of the hill. He looks carefully around and then sends me to get it. When I brought it back he ordered me to hide it between the stones. At a time without any traffic he told me to run quick over the main road and put the iron piece between the olive trees. When we walked back to the village he threw it on he ground every time a private car or soldier car passed.

13.4.06 Nothing to report. Well for Ziad it was an eventful day as he had a daughter. I asked if they should celebrate it, but he informed me that it was a daughter, so no big party.

14.4.06 I am with Hadj Ibrahim who grazes his sheep near the main road where the illegal settler road goes to Kfar Ja’ir. A ‘hummer’ arrives and takes position at the next cross, by the road to Susya. They are watching us for some time. It seems not to be a checkpoint because nobody is stopped. After some time they just leave. 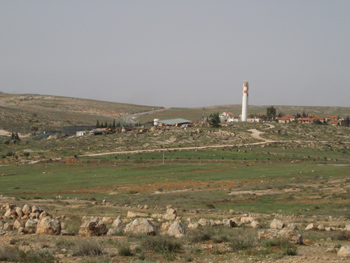 In the afternoon the shepherds go into the valley where they say there is never any problem. I decide to go another way to the valley to get a panoramic photo of the valley. I take the route towards Kfar Ja’ir, and half way up I see 5 young people in the fields of the village. They are dressed in white kippa and white shirts. When I walk up to them they walk away. When I speed up, they speed up. When they cross the illegal settler road and go towards Susya they shout something at me, and I just wave my arms and shout ‘hello’. I did not know if this could mean anything, but I think they were just party dressed young guests in Susya and they wanted to have a walk in the area. 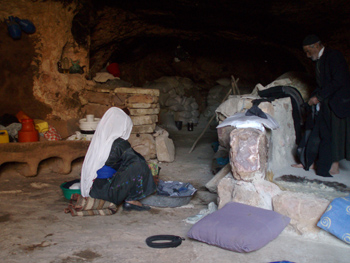 15.4.06 No problems. Everything quiet. In the afternoon a UN jeep turns up with 2 people from UNWRA and 2 from Amnesty International. They took photos of the structures that are ordered to be demolished and had talks with the families about medical needs. They told me that some other villages in the neighbourhood are harassed by settlers and that there is some jealousy about the fact that Qawawis got internationals and they do not! They stress that it would b good if more internationals would be there.