by: Alys a member of IWPS (The International Womens Peace Service) Prologue By ISM media 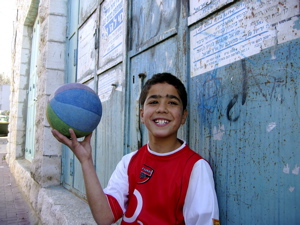 Hebron, a city in the southern part of the West Bank, is unique in that the settlements, inhabited by fanatical Zionists, are located right within Palestinian neighborhoods. The proximity of the settlements and the often violent and abusive behavior of the settlers, makes life extremely difficult for the Palestinians whose homes now fall into H2, the Israeli-controlled area.

The population of Tel Rumeida settlement, along with the three other settlements located in the Old City (Beit Hadassa, Avraham Avinu and Beit Romano), totals around 500, yet results in approximately 4,000 soldiers being stationed there. The daily lives of Palestinians are severely disrupted by both the settlers and the military.

Tel Rumeida settlement, which began in 1984 with six mobile homes/caravans occupying Palestinian land, has continued to expand, with the settlers using any means necessary in their attempts to drive the Palestinians away from their homes and land. In 1998 the Israeli government officially approved the settlement and in 2001 the Israeli Defence Ministry gave a permit to build 16 housing units. Without the support — financial and military — of the Israeli government, it would be hard, if not impossible, for the settlement to continue.

The settlers are extremely hostile, on many occasions violent and abusive. The forms of violence include throwing stones and rocks, spitting and physically attacking Palestinians, sometimes resulting in broken bones. The settlers are free to wander the streets with guns slung over their backs. Their armed presence and near impunity before the law means they wield great power.

For the Palestinian families whose homes are now spitting distance — literally — from the settlements, their refusal to move, to be driven out, is a daily form of resistance. It is a resistance which takes courage,determination, and strength.

Shabbat. A beautiful spring day. Two teenage boys walking casually down the deserted main street. In another place, in another life, maybe a different story. But here they are armed settlers. Teenage boys, indoctrinated with fanatical religious beliefs, guns slung over their backs. A street that had formally been a thriving, bustling market. Now not a single shop remains open and only a handful of Palestinian families remain living there.

And for the Palestinians there is much to negotiate. For the families who now have the settlers living right next to them, on their land, even leaving the house is an ordeal. Not only risking being attacked, spat at, verbally abused, but also some are no longer free to walk down the street to reach their house.

Three small girls on their way home from school help each other climb over razor wire which blocks their way home. No longer able to walk down the street, the only route left to them — a narrow, rough track cut into the hills — is now blocked by razor wire.

I was shocked walking through the deserted Old City, once a thriving Palestinian market area, now a ghost of its former self. Wire meshing above my head. A net strung across the alleyway to catch the rubbish thrown by the settlers — toilet paper, rotting vegetables, lumps of concrete.

The journey to school not only involves negotiating the checkpoints, but also the settlers. Internationals are involved in the ‘school patrols,’ strategically positioned along the route to school (and indeed some remaining in the school itself) intervening when necessary. Getting between the settlers and the Palestinian children they are throwing stones at. Hopefully helping the journey to school be less of an ordeal. And throughout the afternoon being a visible presence on the streets, complete with video cameras. The camera not only documenting, but also acting as a deterrent.

H2, the Israeli-controlled part of Hebron, is an intense, crazy place. Resistance takes many forms. Refusing to be driven from your home is an act of resistance. Playing football in the street, laughing, having even a fraction of trust in strangers — all these are forms of resistance. I was touched by the strength of the Palestinians as they sought to maintain their day to day lives
and humanity in the face of such hostility and insanity.

Prologue:
On Saturday the 1st of April, Silvana Hogg a Swiss human rights worker with the Ecumenical Accompaniment Program in Palestine and Israel (EAPPI) was assaulted by an Israeli settler in the Tel Rumeida area of Hebron. This follows on from the previous Saturday when Brian Morgan, an America human rights worker with the Tel Rumeida Project, was attacked by a mob of 20 Jewish settlers while a nearby Israeli soldier ignored repeated pleas for help. Bith required stiches to the head.

Silvana was accompanying Palestinian school children on their way home when the attack happened about 5 meters from a small Israeli army outpost. Three eyewitnesses to the assault went into the Israeli police station wwith a photograph of the settler ofeender and made statements. Silvana herself went to make a statement the next day. The Police are yet to get back to Silvana about the attack.

Both Silvana and Brian regularly work in the Tel Rumeida area accompanying Palestinian school children on the their way to and from classes so that there is less chance that the children will be attacked by the settlers. Attacks on Palestinians and internationals increase on the Sabbath and on holidays when settler youths are not in school and when religious settlers can not use their cars and have to walk home, often harassing Palestinians as they go.