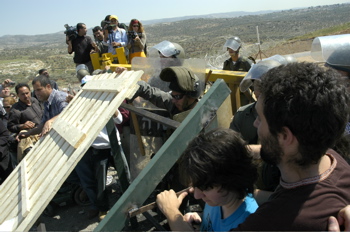 At about 1:20 pm this Friday 31st of March the weekly demonstration against the apartheid barrier in Bil’in set off. As usual, it consisted of Palestinians, Israelis and internationals – about 300 in all. When we got to the fence, we were met by a crowd of about 50 Israeli soldiers, some border police and a special riot squad.

The villagers carried a large-scale metal pot that symbolized the empty food pots of the Palestinians that is caused by two “walls”. The first is a physical wall built by Israel in the West Bank. The second is the new international withdrawal of aid from the Palestinian Authority after the Hamas election victory. 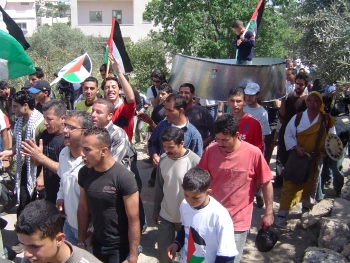 The plan for the day was to use a frame as a bridge in order to be able to get over the gate without touching it. This was in order to get around the fact that Palestinians are often accused of “damaging security property” if they touch the fence or gate – this way we would be able to cross to the stolen land without actually touching the gate. 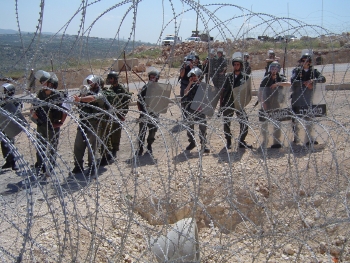 The soldiers reacted to our arrival by attacking the demonstration with sound bombs and beatings. They also fired a rubber bullet when the bridging frame was brought next to the razor-wire. On a second attempt to bring the frame to the gate they beat the demonstrators who were bringing it there and pushed it away. Towards the end they also shot rubber bullets and tear gas at stone-throwing youth from the village. 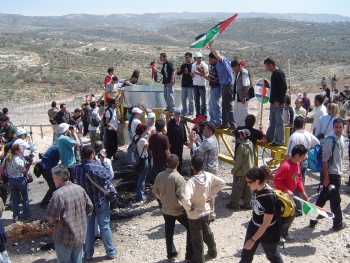