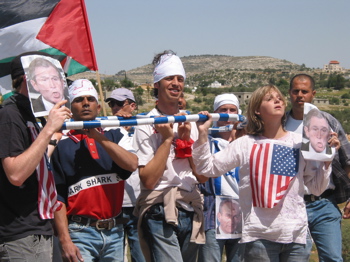 On Friday the 14th of April, the villagers of Bil’in held their weekly demonstration against the apartheid wall that is de-facto annexing over half of their land to Israel. Land that the government of Israel uses to build illegal Israeli settlements on.

When we got to the gate in the fence, the way was barred by two jeeps on the opposite side. When we approached, singing and chanting, several soldiers with clubs and riot shields emerged and stood on the jeeps threatening to beat the demonstrators over the razor wire. Several of the demonstrators soon opened the gate and started trying to move the razor wire out of the way. Soldiers swung their clubs at the demonstrators, though they were usually too far away to make contact because of the wire.

After about half an hour standing-off in this way, we started to demonstrate around the perimeter of the fence. At several points along the way, demonstrators tried to crawl through gaps in the razor wire to reach the patrol road fence and access the annexed village land. The first attempt was thwarted by a wall of soldiers, but at two other points demonstrators managed to get through before the soldiers could take action and we held sit down demonstrations on the patrol road.

The soldiers tried unsuccessfully to drive us away with beatings, but since we were already on the road, there was little they could do. They hit one Palestinian, giving him a bloody nose. After about 20 minutes, we decided to end the sit down protests and retreat back to the village side of the razor wire, one by one in a calm fashion (Palestinians leaving first to avoid arrests). Four Israelis and a Jewish American student were detained for an hour and released without charges when the demonstration had finished.