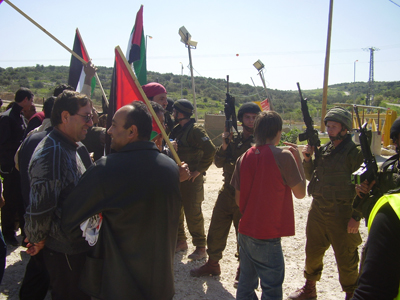 Yesterday there was a demonstration against the wall and checkpoints in Tulkarem. We were at a checkpoint called Jebara where the wall has cut off the village of Jebara and its 500 residents. Obviously 500 people aren’t a self sufficient economy and they desperately need free access to the town of Tulkarem and surrounding villages for basic supplies and things like school. When we got there the army was hardly pleased to see us. They had already fired shots in the air and unlike most demonstrations where the army keeps their fire arms by their side, here they kept them raised upwards. They were rather annoyed by the fact that there were so many press and activists with cameras.

The Army kept threatening to have peoples camera’s confiscated and they even threatened to “break” me if I proceeded to take pictures. But there was nothing they could do as we continued to take photo’s whilst chanting and gathering around the checkpoint. ‘

The people of Tulkarem are planning on making this a weekly Saturday demonstration, which is great especially given that there are already so many Saturday rallies. There was also a very healthy number of women at this rally, which I think was in no small part due to an active Women’s Union in Tulkarem.

One thing which hit home for me just how this Apartheid system works was a sign at the checkpoint with the words “Dear Citizen: Entrance to this village is forbidden for Israeli Citizens by order of the IDF commander of the region. 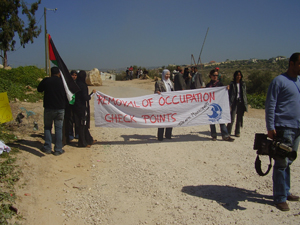 I couldn’t get a look at the second half of the sign but just as the South African Apartheid regime didn’t want White South Africans to see how the Black population lived, Israel also wants to deny its citizens from seeing how the Palestinian people live.