New
Home / Reports / Two Villages, One Struggle; Aboud and Bil’in Against the Wall

Two Villages, One Struggle; Aboud and Bil’in Against the Wall

Palestinians, Internationals & Israelis Protest on the Path of the Wall in Aboud

150 Palestinians, Internationals and Israelis marched through the streets of Aboud on Friday to protest against the Apartheid Wall. The villagers hope to raise awareness that the current path of the barrier will confiscate 20 percent of the West Bank’s water supply, numerous important archeological sites, a historical church, and much of the village’s land. They also emphasized the issue of the Danish cartoons which insulted the Prophet Mohammed and have caused a much misunderstood global reaction.

The rally marched through the village, down the main road and out into the village’s agricultural lands, where the IOF have begun laying the foundation for the wall’s path through the lands of Aboud. 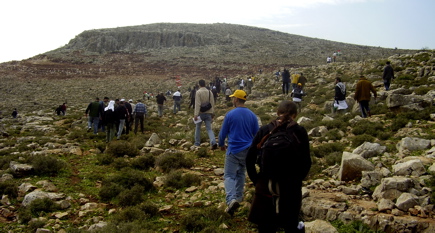 Path of the Wall seen in the distance

There were blankets on this path to secure the sands while the Israeli government builds the illegal Apartheid wall. In an act of non-violent resistance and protest of Israel’s further construction on their lands, people attending the rally set fire to the blankets and placed large rocks on the road.

The PPP had a very strong presence at the rally, celebrating the anniversary of their organisation and declaring the need to continue the campaign against the wall and the occupation. Comments echoed by Moheeb Awwad from Fateh who talked about the need for all Palestinian factions to unite in continuing to work against the occupation.

There was also a call from Bassam Al Salhi from the PPP to support the internationals who were working with the Palestinians to end the occupation and to separate them from their governments some of which supported the racist cartoons which have been published around Europe. An international activist also spoke, affirming the Palestinian struggle; the non-violent resistance against the Wall and settlements and spoke out concerning the offensive cartoon printed recently in a Danish newspaper.

The printing of cartoons, which were insulting to Islam’s prophet Mohammed, were described as an attempt to break the good ties between Muslims and Christians in the Palestinian territories and elsewhere. This is particularly important for the people of Aboud, who are both Muslim and Christian and have lived in peace together for generations.

The rally then moved around the corner when it was confronted by an Israeli military jeep. Many Palestinians threw stones at the jeep in an attempt to force it back. The Israeli military responded by firing warning shots of live ammunition in the air. Soon, the rally moved back to the village, undeterred by the violence of the Israeli Military, and determined to continue their resistance.

The lawyer of the Popular Committee, Mohammad Dahla, said that so far there have not been any trees uprooted in the area, because the construction is being carried out in a very rocky area at the moment. But the planned route indicates that the coming stage will include confiscating and bulldozing farmlands.

“We will achieve a ruling to bar the uprooting of the trees, and farmlands”, Dahla stated, “The court said that the route will be shifted, we still did not receive any new maps or plans”.

Since Israel started the construction of the Wall in Aboud, 1700 Dunams of farmlands were annexed, and bulldozed. Additional 3000 Dunams will be isolated behind the Wall.

The weekly non-violent protests against the Israeli Apartheid wall continued this Friday in Bil’in, with Palestinians from the village uniting once again with Internationals and Israelis in a display of resistance to the ongoing theft of their village’s land.

Recently, Bil’in has expanded what is the first Palestinian settlement, located west of the barrier. On Tuesday night Bil’in villagers built the outpost’s second house. Abdullah Abu Rahma, coordinator of the Popular Committee Against the Wall, reported that the protesters attempted to reach a room they installed near the Wall in order to protest against it and and against land expropriation for settlement construction and expansion.

“Twenty protesters managed to reach the site, stood near the military bulldozers, and raised a Palestinian flag”, Abu Rahma stated, “soldiers surrounded and attacked them, and threatened to arrest them if they do not leave the area”.

“The presence of the army is provocation, their checkpoints, wall, settlement activities and land grab are direct violations to our rights, and the international law”, Abu Rahma added, “We have a protest center behind the Wall, we always protest peacefully there, we have the right to resist the occupation and to resist the land expropriation policy practiced against us”.

In total, six protesters were injured by rubber-coated bullets, dozens suffocated after inhaling gas fired by the army.

Soldiers detained eleven international peace activists, two Israelis and two Palestinians. All were held for three hours before they were released, except for one Israeli peace activist who was transferred to a nearby military base.

The one year anniversary of the struggle of Bil’in is fast approaching, on February 20th, and their will to resist the Occupation and the Apartheid Wall has not diminished since then. The International Solidarity Movement (ISM) is inviting volunteers to come to Palestine for a conference on Joint Nonviolent Struggle in Bil’in and for ISM’s Spring campaign.