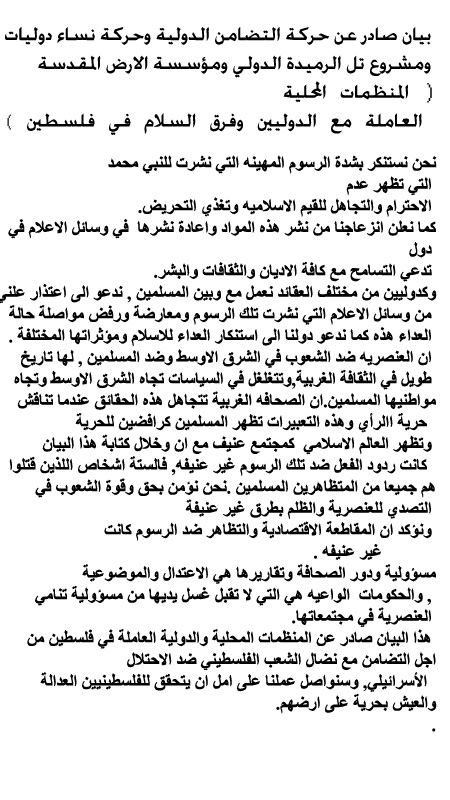 We strongly condemn the recently published derogatory illustrations of the prophet Mohammed. The cartoons demonstrate disrespect and ignorance about Islam and perhaps also deliberate incitement. We are troubled that such material has been published and backed by media of countries that claim to tolerate all religions, cultures and people.

As people of many faiths working with and among Muslims we call for public apologies from media that published the cartoons as opposed to continued incitement. We also call upon all governments to condemn Islamophobia and its various expressions.

Racism against people in the Middle East and against Muslims has a long history in Western culture. It also underlies much of the West’s current policies in the Middle East and toward its own Muslim citizens. Most Western media are ignoring these facts while discussing the issue of free speech. This frames the situation in a way that fails to accurately represent the deep hurt felt by Muslims, and reinforces stereotypes that the Muslim world rejects Western liberties. The Muslim world’s response is being portrayed as violent. However at the time of writing this statement, though property damage has occurred the protests have largely been nonviolent. Ten people have been killed, all of them Muslim demonstrators.

We believe in the power of people to confront racism and oppression through nonviolent tactics, and recognize that boycott initiatives and most protests sparked by the cartoons have been non-violent. Responsible journalists report in a fair and objective way. Conscientious governments do not wash their hands of responsibility for racism occurring within their societies.

We welcome other organisations to sign this statement. Please send an e-mail to
iwps@palnet.com if you would like to add your organisation to the signatories.