17- year- old Israeli Matan Cohen and American Sara were both shot with rubber bullets in the legs and were retreating when Matan was shot again this time in the eye. Maria from Sweden who was standing next to them said later: “We were at least 200 meters away from any stone throwers. It was very obvious that we were Israeli and Internationals that we were completely peaceful and that we had separated from the demonstration.” Matan is currently in Tel Hashomer hospital. Doctors say that his eye is in danger but it is too early to assess the damage. 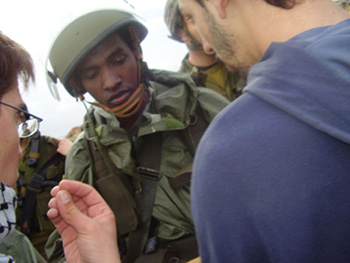 The demonstration today in the village of Beit Sira started with a peaceful March of three hundred people to the village land were olive trees are being uprooted to make way for planned route of the annexation Barrier. The Route of the Barrier in Beit Sira is designed to annex the Makabim settlement and more of Beit Sira’s land to Israel. No work was taking place today.

The demonstrators walked in the direction of the site until they reached the line of Israeli soldiers waiting to block them. A stand off ensued with both the soldiers and the demonstrators behaved in a restrained manner. Everything was peaceful but for some mutual pushing, until a group of border policemen arrived on the scene.

14 people were injured by rubber bullets during the demonstration. Including thirty-year-old Hussni Rayan who has a metal-coated rubber bullet lodged near his kidney and will be operated on tomorrow in Sheik Zaid hospital in Ramallah.