New
Home / In the Media / Injured anti-fence ‘anarchist’ speaks out 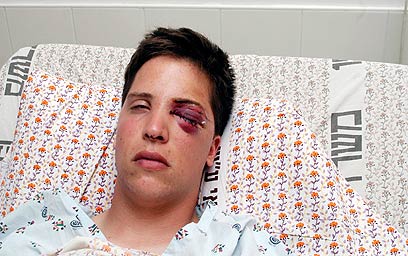 Matah Cohen has sustained eye injuries while protesting the security fence near Ramallah; Says: ‘I feel like the blood of Left-wing activists is cheap’

Matan Cohen, 17, from Tel Aviv, and a member of the “Anarchists Against the Fence” organization, was injured while demonstrating against the security fence near Ramallah.

“My feeling is that the blood of Left-wing activists and the Palestinians is cheap,” he said.

Cohen was shot by Border Police and injured in his eye, and has been hospitalized in the Tel Hashomer Medical Center since Friday.

If bleeding does not stop within 24 hours, Cohen will undergo surgery. In either case, doctors believe his eye has sustained damage. In the best case, his visual range will be affected, and in the worst case, he would lose complete vision in the eye. “Up until now I can’t see out of the eye, and they’ll be able to see if there’s damage only in a few days. I’m worried about damage in my eye and I really hope the bleeding stops,” said Cohen.

Members of the organization have begun documenting their demonstrations due to past experiences with violence. “We have recordings of an army commander who said that he doesn’t want the situation to turn violent, and who tried to calm things down, saying not to shoot. But a Border Police is also heard saying ‘shoot everyone one of them with a rubber bullet.’ When I was shot I was standing with three people, within around a 20 meter range from a Border Police force. We said: ‘Don’t shoot, we are not threatening you and we are not endangering you,’ but they opened fire, and also directed it to the head, violating all of their rules of engagement. I felt the impact in the eye, and with the remainder of my strength, I managed to run from them. My entire hand and head were filled with blood,” said Cohen.

‘No connection to Amona’

Three soldiers and Border Police officers were injured by rocks thrown at them. One police officer was taken to hospital.

According to police, two disturbances of the peace took place on Friday in the Ramallah area, as part of protests against the construction of the security fence. Hundreds of Palestinians, Left-wing activists, and foreigners took part in the disturbances, whom entered a closed military zone. Demonstrators threw rocks at security forces, who responded with crowd dispersal means.

A few months ago, a soldier lost his left eye in similar protests after a rock was thrown at him by demonstrators.

Cohen, who completed his high school studies, has been taking part in protests against the route of the fence for three years, and says he witnessed harsh violence on the part of soldiers and Police officers. “The approach is that it’s legitimate to fire at demonstrators, even when they are nonviolent. The IDF and Border Police use live ammunition, tear gas, and rubber bullets, and hundreds of people have been injured in this period. In yesterday’s demonstration another 11 Palestinians were injured, one of them was even operated on at a hospital in Ramallah,” he said.