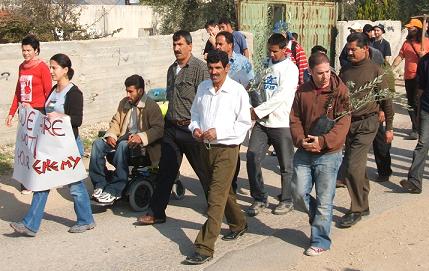 Villagers from Bil’in, supported by international and Israeli activists, succeeded in planting three new olive trees at the construction site of the illegal apartheid wall, close to their village on the West Bank. Soldiers responded to this practical and symbolic gesture with brute force and by shooting tear gas and rubber coated bullets at the non-violent demonstrators.

At 12:15, about 200 Palestinians, accompanied by 50 International and Israeli activists, started to walk toward the construction site of the wall. Still far away from the line of soldiers that awaited them, they were nevertheless fired on with tear gas canisters, in an aggressive attempt from the Israeli soldiers to stop the protest before it had even begun. One Israeli activist was directly hit with a tear gas canister leaving burn marks on his head and shoulder. 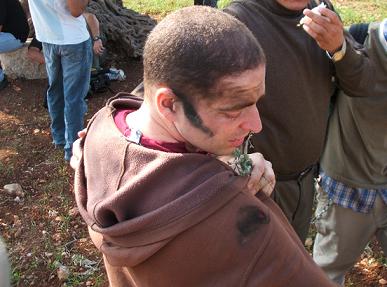 Eventually, after regrouping, the demonstrators managed to reach the construction site, chanting and clapping their hands. Soldiers, apparently eager to do something violent, arrested an Israeli activist, Yonatan Polack, for no apparent reason other than the fact he was carrying an olive tree saplings. He was released a few hours later when the demonstration had finished. A Palestinian activist spoke, condemning the construction of the apartheid wall and the violent Israeli occupation of Palestine. He also called for the release of the four hostages from CPT (Christian Peacemaker Team), who are currently being held in Iraq.

The demonstrators started to plant the olive trees on what, according to international law, is Palestinian soil. The saplings were meant to symbolically replace over two hundred olive trees stolen by the companies building the large Modi’in Elit settlement on the lands of Bil’in. Soldiers pushed the demonstrators around, beat them, and dragged them on the ground, but did not manage to stop the new trees from taking root. A group of illegal Israeli settlers stood by one of the military jeeps and watched the spectacle, photographed the demonstrators, and made sure that the soldiers were doing their best to safeguard settler interests.

After the trees were planted, the demonstrators started to head back to the village. At this point, soldiers fired more tear gas canisters. UN Special Rapporteur on Human Rights in the Palestinian Territories, John Dugard, who is preparing a report for the U.N. general assembly, was overcome by teargas. Rubber bullets were also fired, one of which hit a Palestinian boy in the foot. He received immediate care from medical personnel in the area under the branches of an olive tree, while the air was still thick with tear gas.