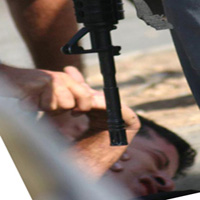 Mohammed Mansour being tortured during his arrest in June, 2004 in Al Ram

On the 22nd of November during the most recent Hearing of Palestinian nonviolent organiser Mohammed Mansour from Biddu, court case the prosecution finally gave up on getting Mohammed Mansour to agree to stop participating in demonstrations for the next two years and pay a 3,500 shekel fine of his own free will.

“I would prefer to go to jail than pay one shekel to the Occupation. It is not I, but those that build the wall that are the criminals” said Mohammed.

In the next session, set for the 10th of January the Judge will begin hearing witnesses. Mohammed was initially arrested in June 2004 at a nonviolent demonstration in Al Ram. Undercover Israeli agents stormed the crowd and many, including Mohammed and a Palestinian photographer for “Yediot Ahronot,” a large Israeli newspaper, were severely beaten. Mohammed was hospitalised and then held for a week before his release on bail together with another three Palestinians, including two minors, who were arrested at the Al Ram demonstration. Five Israeli peace activists, also arrested at the demonstration, were released a few hours following their arrest.

Mohammed is being charged with assaulting a police officer, throwing stones and presiding illegally in an “Israeli area.”

Mohammed’s trail is taking place while sixteen nonviolent activists from the village of Bil’in are currently in jail in an attempt to crush the nonviolent resistance in the village.

The International Solidarity Movement condemns the Israeli legal system defense of war crimes committed by the Israeli military and settlers and its criminalization of nonviolent protest against the Occupation and Apartheid wall.