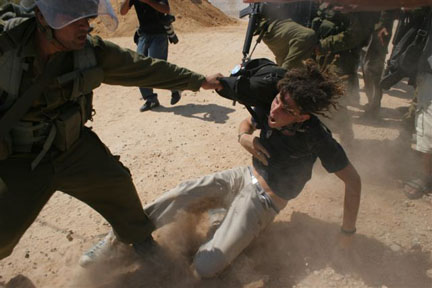 “We face them with backpacks, sandals and signs. They face us in full riot gear.”
— Greta Berlin, quoted from Bil’in today in the New York Times

By ISM volunteers
Photos by The Israeli Anarchists
unless otherwise indicated

Israeli occupation soldiers launched an attack Friday afternoon in the West Bank village of Bil’in in an attempt to stop the regularly scheduled peaceful demonstration against the annexation wall being built on seized land. But in spite of a flurry of tear gas, rubber bullets, sound grenades and the sound of live ammunition, soldiers were unable deter villagers from drawing more attention to the illegality of the land confiscation taking place there.

The excessive violence soldiers employed drew an immediate response from Israeli organizations, the media and at least one Knesset member who contacted military officials in protest. Soldiers briefly arrested a leader of peaceful resistance in Bil’in, but detained him after being hounded by people wielding video cameras.

Report:
“This was the most violent response to a protest that I’ve seen in my time here,” said Lee, an ISM activist. “The Israelis used tear gas, sound bombs, rubber bullets, and live ammunition. After the demonstration, children went around the village, picking up handfulls of rubber bullets and gunshells.”

At 12:15 p.m., soldiers marched into the center of the village in riot gear and helmets. They knew that the nonviolent demonstration began at 1 p.m., and they appeared determined to aggravate the villagers and the internationals. They stomped about, standing in doorways, then moved down the street toward the ISM apartment. At first, little boys danced and sang in front of them, jumping up and down as the soldiers hung around under the trees looking frustrated. 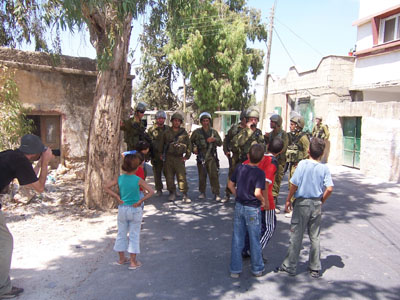 One small boy had a toy machine gun that made noise. According to the Palestinians who witnessed the exchange, a soldier told the father he couldn’t go home if the boy had the toy gun. The father said, “But it’s his.” “If I see him on the street with that gun, I’ll shoot him,” was the soldier’s response.

A half hour before the demonstration was set to begin, the soldiers started throwing sound bombs at us, then tear gas in front of the ISM apartment. Tears streamed down our faces as we grabbed the onions and limes that had been given to us to counter the effects of the gas. A tear gas canister was fired into the nearby mosque as well, where many villagers were finishing afternoon prayers. 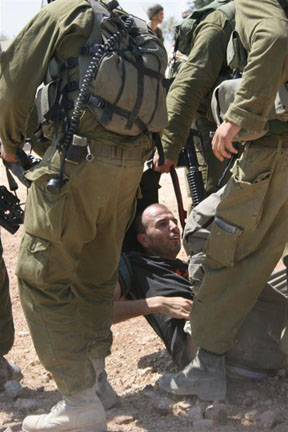 We were waiting for the Israeli peace activists to come, before starting the march to the demonstration site. And, sure enough, a few kids began to throw stones in response to the tear gas, sound bombs, rubber bullets, then, finally live ammunition.

One ISM activist’s face was less than six inches from a soldiers rifle when he fired a round of live ammunitions. The activist was standing next to people blocking army jeeps from entering the village. Soldiers came running toward the group, one fired his M-16 into the air and was shouting in Hebrew.

“I stood in front of him and said ‘please don’t shoot, these are peaceful demonstrators, why are you shooting at them,” the activist from the U.S. said. In response, the placed the gun six inches away from the activist’s face and fired one round of live ammunition.

The scene quickly deteriorated into the soldiers roughing up peace activists and shooting at boys who were throwing stones to protect their village from the incursion.

“They were shooting down the street at the shabab (kids who throw stones in response to soldier incursions), said an ISM-London activist named Catja. “A jeep drove at running speed toward us. Because I was dead center to the bonnet of the jeep, no matter what direction I went I would be knocked down, so I jumped on the jeep and the man standing next to me did the same. The jeep proceeded to drive very fast, about 200 meters down the street, swerving around. Then they slammed the brakes and the soldier came out of the passenger seat and hit me round the head. I was later told that he was the commander.”

Israeli peace activists arrived just before 1 p.m. and we decided to march to the demonstration site anyhow, even if we couldn’t perform the non-violent activity we had planned. As we walked to the site, the soldiers began to shoot teargas and sound bombs at us once more, then started to shove us when we didn’t move fast enough. They were pushing older women, shoving activists into each other and into other soldiers, and screaming at us in Hebrew.

Soldiers briefly attempted to arrest a leading coordinator of peaceful resistance in Bil’in, Mohammed Al Khateb, during the chaos. As he walked by them, two soldiers rushed out of line and grabbed him. They hit him over the head, threw him on the ground, then took him away. One Israeli activist said a soldier told him, “We don’t want these demonstrations any more in Bil’in.” 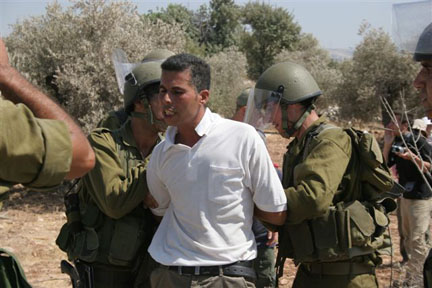 By the end of the afternoon, two people had been injured, six Israelis detained with two arrested for “assaulting an officer”, and Mohammed also was detained. As of this writing, all have been released except for two Israelis.

“The commander had come to me and said ‘I don’t want to see another protest in this village,’ ” Al Khateb said. “I told him, ‘you have the power the occupation, but we’ll continue demonstrating even if we’re forced to do them in our own homes, we’ll keep going.” Later, the army commander had told Al Khateb that he was forbidden from ever again demonstrating with internationals or Israelis. “He said if we want to demonstrate, we must do it alone.”

This action by the Israeli military is a deliberate attempt to discourage nonviolent resistance. They respond with ever-increasing violence, today using everything in their arsenal against us.

The use of excessive violence illustrates the oppression Palestinians face even when they attempt to peacefully protest against the theft of land and the illegal occupation under which they’re forced to live. Unable to justify these acts against the Palestinian people, the Israeli government continues to clamp down on any sort of outcry that seeks to draw attention to it.

The military commander’s demand for Israelis and foreign peace activists to stay away also is telling. It indicates that the brutality that soldiers would prefer to use against Palestinians is lessened by an international presence. To this end, ISM will continue to offer its support to any Palestinians who suffer under the occupation, including the people of Bil’in.

“We face them with backpacks, sandals and signs,” ISM activist Great Berlin was quoted as saying in the New York Times today from Bil’in. “They face us in full riot gear.”

From beyond the scene
During the melee, a continuous stream of reports coming out from the scene spurred a number of media outlets, organizations and individuals to action. Israel IndyMedia reported use of live ammunition as it was going on. The Israeli peace organization, Gush Shalom, sent out a call (pasted at the bottom of this post) for outside intervention within minutes after Israeli soldiers began instigating violence. While that took place, Rabbis For Human Rights contacted Israeli military officials and Knesset members in an attempt to pressure the military to stop using such excessive force against civilians in Bil’in.

According to the far-right Israeli news site Autz Sheva, Knesset member Zahava Gal-On, in light of the Bil’in incursion, called Deputy Defense Minister Ze’ev Boim to accuse the military “of using unnecessary force against left-wing Israelis and [Palestinians] protesting against the security fence in the Bil’in area.” 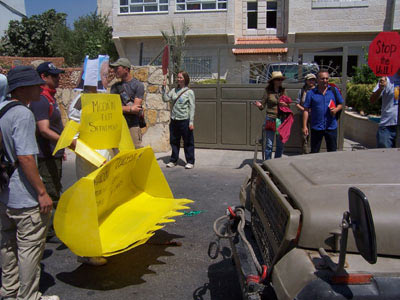 More Photos:
• Israeli soldiers kick peace activist on the ground.
• More kicking of the same activist.
• Soldiers taking down yet another unarmed person.

Call to action released from Gush Shalom
WHY HAVE BIL’IN PEOPLE NOT THE RIGHT TO NONVIOLENT PROTEST WHEN THEIR LANDS ARE TAKEN?

With this question, phone, fax, email to everybody who matters; here follow a few suggestions: