Apartheid and Agrexco in the Jordan Valley

The fence that appears on no maps.

In Israel and occupied Palestine the colour orange is symbolic of opposition to the Gaza ‘disengagement’. It can be seen on banners; t-shirts; propaganda material; protesters storming the old city in Jerusalem or the young people with petitions gathering signatures in Israeli bus stations. Orange streamers are handed out at road junctions in Israel and attached to cars flying down the settler-only highways of the West Bank.

It therefore came as a surprise to hear that one of the orange streamers was seen attached to a tractor belonging to a Bedouin Palestinian living in the Jordan Valley. When questioned, the man replied, “If they are thrown out of Gaza, they will come here. They are dangerous. We don’t want them here.” 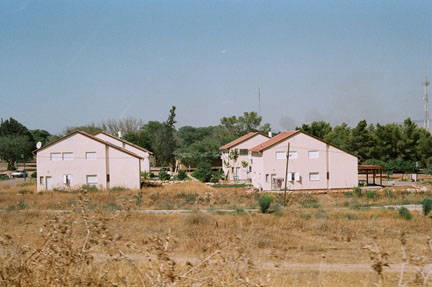 On the 25th of June 2005 an Israeli spokesperson announced a plan intended to increase the number of settlers in the Jordan Valley by 50 percent in one year. The cost of new housing units will be $13.5 million (U.S.) in the initial year, and will increase to $32.5 million in the following year. The plan focuses on the development of agriculture and tourism in the valley, with grants of up to $22 million available for agricultural development. Additional economic incentives and benefits will be offered to encourage potential immigrants, particularly newly married couples.

The plan has already started to emerge on the ground, as the silver arches of newly-constructed greenhouses materialise, shimmering in the August heat. Large areas of land have suddenly been surrounded by fences and declared ‘Military Zones’: the initial stage in the process of colonisation. And a new wave of evictions has begun.

Most of the 50,000 Palestinians in the valley live in a state of absolute poverty. Since the beginning of the occupation in 1967 they have been systematically denied basic human rights, particularly access to water and housing. Thirteen Palestinian villages were declared ‘legal’ by Israel in 1967. They are visibly obvious, being the only Palestinian areas where most of the houses are made of anything more substantial than plastic, wood and a few sheets of scavenged metal. Outside of these areas concrete constructions are invariably destroyed.

I drank tea with a Bedouin family in their ‘house’ in Fasayil, which was made of wood and plastic. The village is half legal and half illegal; a quick glance is enough to determine which area is which. As she spoke to us, the Grandmother of the family fluttered a piece of paper between her fingers. It was the military demolition order for their home, issued about a month before. Apparently, no dwelling is too humble to face the might of the military bulldozers and tanks, and the family was waiting for them to arrive. It was not the first time they had been evicted: In 1948 they were made refugees when the state of Israel was created. Last year they were evicted from a site about three kilometers away, to make way for new settlers. When I asked what would happen if their home was demolished, the woman replied that the Red Crescent would bring them tents to live in. “Where will you put them?” I asked. “Here. We have nowhere else to go.” 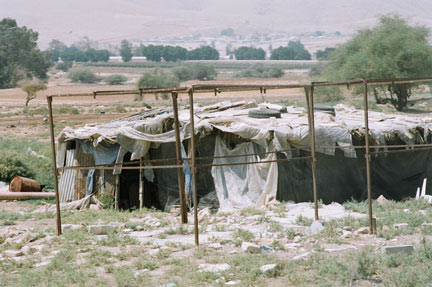 A typical home in what’s left of the Palestinian village of Jiftlik in the Jordan Valley.

The Israeli Occupation Forces demolished eleven houses in Jiftlik on the 22nd of June. Next to one of the remaining concrete buildings is a shack made of plastic. The men who built the concrete house live in the plastic one next door. They are afraid to move themselves and their things into the concrete house, anticipating that it too will soon be demolished. They recently moved out of their family house when one of their brothers got married. It consists of two rooms constructed from clay and wood, and ten people live there. As families expand they need more room to live in, but the space for the natural growth of the Palestinian population in the Jordan Valley is systematically denied.
Road 90, which extends the length of the valley parallel to the Jordan River, cuts between huge plantations of palm trees, grapes and banana trees, as well as greenhouses full of plants and vegetables for export. Such intensive agro-industry requires massive amounts of water, which is provided by wells four or five hundred meters deep. These are housed in cylindrical towers that sit on the foothills of the mountains separating the Jordan Valley from the rest of the West Bank. Underneath the towers it is often possible to see Palestinian communities living in their flimsy housing. They are denied access to the water above them, and have to take tractor carts to the nearest wells they are permitted to use, often a distance of more than 20 kilometers. The three cubic meters of water they collect with their portable tanks only lasts a few days and gets very hot under the relentless sun.

Near Jiftlik, we saw a young woman with a donkey slowly climbing the hill to the water tower above her home. She was on her way to ‘steal’ some water, a few gallons perhaps. It was midday, and the overwhelming heat reduced the likelihood of a guard being on duty near the tower.

I never imagined that water reserves could look threatening.

162 artesian wells in the Jordan Valley, established by the Jordanians during their period of control of the West Bank, are now dysfunctional. They have either been destroyed or they have dried up because of the deeper, settler’s wells nearby. Zubeidat is a village of 1,600 people on an area of land just over ten acres. Their well became salty and polluted in 1984, because of the nearby settlements. Last year they were finally granted permission to build a new well. In the intervening years each family had to bring water from Jericho, a distance of about 25 kilometers, or steal it from the settlements. In 2004, five people in the valley were prosecuted for ‘stealing’ water. All of the Israeli plantations are surrounded by electric fences to prevent such activity.

Zubeidat still uses the old well for irrigating it’s agricultural land, despite the poor quality water it extracts. In Jiftlik I saw (and smelt) farmland that was irrigated with sewage water from Nablus and one of it’s adjacent settlements, Elon More.

The most obvious source of water in the valley is the Jordan River, but it is impossible to reach this because of the electric fence which extends from the Green Line in the North to beyond Jericho in the South. This fence annexes 500 square kilometers of land, once used by the Palestinians for agriculture. Amazingly, it is not marked on the maps produced by the UN.

A demolished home in Jiftlik.

The Palestinian population in the valley has little choice but to try to sustain their livelihoods by farming. I spent a surreal couple of hours sweltering in the heat of a wooden and plastic house, listening as a farmer told me about the time in the late 1980’s when the export company took a huge quantity of agricultural produce from the Palestinian farmers and then claimed that the ship taking it to Europe had sunk. Not only did the Palestinians not get paid for their produce, but the company actually made the farmers pay for the boxes they were packed in and the stickers that announced their place of origin: Israel. I could not quite believe what I was hearing. How many farmers were effected? The entire valley.

The name of the company? Agrexco, which trades by the brand name of Carmel.

Carmel might be a name familiar to European and American consumers: their fresh fruit and vegetables are common in any supermarket. Perhaps people who pay attention to international freight know that Agrexco also make their own ships, including the state of the art “Carmel Ecofresh… a revolutionary design for cargo refrigeration”. 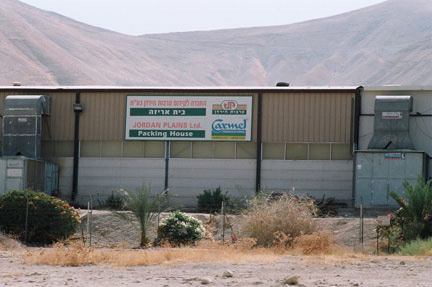 A Carmel packing house at the Tomer settlement.

Agrexco is 50 percent owned by the Israeli state and all of the produce exported from the valley is packed by and sold through them. Palestinian farmers no longer attempt to export because their dealings with the company have been so catastrophic. Nor are they able to take their produce to other markets in Palestine, because it is impossible to get it through the Jordan Valley checkpoints. Entire vegetable crops have been left to rot in the ground or used to feed sheep and goats.

There was no chance of the Palestinian farmers seeking legal redress in the case of the sinking ship, or in other cases where Agrexco has behaved illegally in the valley. However, the company will find itself in a British court next week, and although they do not stand accused they will find themselves in the position of defending their activity.

In November last year a group of British activists blockaded the company’s main distribution centre in Middlesex, UK, preventing tens of thousands of pounds worth of goods from reaching supermarket shelves and subsequently British kitchens. Seven people are facing charges of aggravated trespass: the prevention of lawful activity. They will argue that the company’s activity is unlawful, being ancillary to the crime of apartheid, war crimes and crimes against humanity. This in addition to the fact that the goods Agrexco export from settlements in the West Bank are illegally sold as “Produce of Israel”, thereby benefiting from the preferential terms of trade that Europe grants Israeli imports.

The difference between the luxurious life in the settlements and the absence of the bare necessities in the Palestinian communities of the Jordan Valley is far from accidental: the subjugation is meticulously planned and executed. It is blatant and brutal apartheid. But although it could be argued that this segregationist system is based on religion (nobody could claim that the citizens of Israel and its settlements are from a single ethnic or racial group), I believe we need to discard the framework of analysis that presents the Palestine/Israel conflict as one of Jews against Muslims, or Islam against the West. Instead we need to look at it as part of the global domination of the all-powerful force of capital and it’s warriors, the transnational corporations. Indigenous people who live sustainably, primarily from their direct environment, are under attack all over the world. 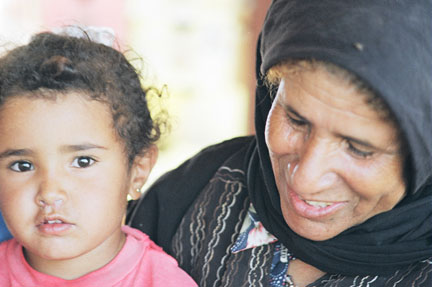 A mother and her child in Jiflik.

The cost of a box of Carmel tomatoes, dates, flowers or grapes is unimaginably high. It is not paid for in coins by the person at a supermarket checkout in the UK, but in the suffering of the Palestinian people. The time for Western consumers to recognise their complicity in such suffering is long overdue. Seven people who stand accused at Uxbridge Magistrates Court on Wednesday will highlight the connection between the produce and the persecution, our pounds and other people’s poverty.