Days in the life around the Tel Rumeida settlers in Hebron 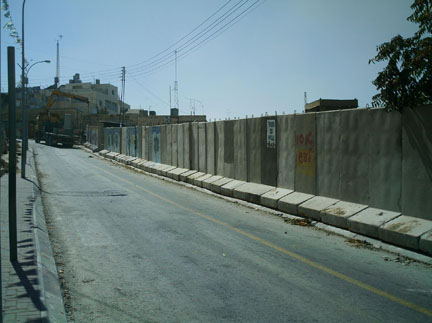 These last few days around the illegal settlement of Tel Rumeida have been filled with constant interruptions and harassment in the lives of the Palestinians as annexation walls are constructed, soldiers continue putting up roadblocks and establishing checkpoints, and settlers continue to make life unbearable for Palestinians in this section of Hebron.

The Tel Rumeida settlement is home to around 30-50 settlers in Hebron. It’s home to one of the most violent and extremist factions of the settler movement. The area is also inhabited by more than a hundred Palestinian families, whose daily lives are a constant tale of harassment and abuse. The paved roads are frequently off limit to Palestinians who often are forbidden from walking in the street by the soldiers. 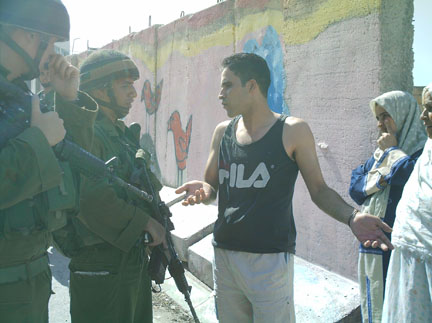 A long walk
Palestinian are forbidden from driving on many nearby roads. Those living in or around Tel Rumeida who are not Israeli must park their cars outside the checkpoints and carry any furniture, food or other supplies up and down the steep roads.

Three checkpoints are situated along the paved road of the small neighborhood. When entering Tel Rumeida, Palestinians must present the soldiers with ID and often becomes targets for casual delays and humiliation.

No ambulances (for Palestinians) allowed
Only ambulances for settlers are allowed inside Tel Rumeida. Yesterday, an elderly Palestinian had to walk with the help of two neighbors down the hill in order to reach her doctor. 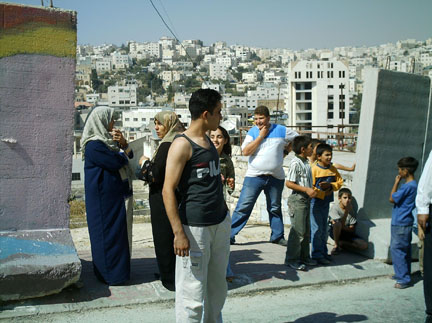 New Wall blocks woman from leaving her home
Further intrusions in the lives of the Palestinians were made yesterday when a wall along the paved road of Tel Rumeida Street was constructed. Settlement leaders and the military said it was to prevent drivers from being shot at.

A Palestinian community leader in Tel Rumeida said that no gunfire has occurred along the entire street and that there has not been a single report of settler injuries.

As the wall was being built, an elderly woman living nearby found it had obstructed her from being able to get to and from her home. After the Palestinian community leader in Tel Rumeida had discussed the problem with a soldier, it was decided that the builders should leave an entrance to the house. That decision was revoked five minutes later, but recalled again when women and children blocked the entrance. Right now there is an entrance with a width of 1.5 meters and all in all around 45-50 concrete barriers with a width of 1 meter and with a height of more than 2 meters were raised.

Settler kids, stones and fire
A small field with trees and grape vines was set on fire today. It was located in the yard of a Palestinian family. The son of a neighbor to this family identified the perpetrator as being one of the settler kids. The family managed to put out the fire with a garden hose and the fire brigade arrived when there was almost no fire left. Even if the fire would have been bigger, the fire brigade wouldn’t have been able to help to their full potential, since they are not allowed to come fully equipped to this area. A woman from Christian Peacemaker Team reported that this was the third fire in ten days.

A group of settler kids, one of them identified as the same kid who set the field on fire, started to throw stones a couple of hours later at some Palestinians working on the roof of a house being renovated. The reason for renovating the house is that the house was damaged by some settlers earlier this year. ISM and TIPH (Temporary International Presence in Hebron) arrived to the scene and had to take cover as the settler kids continued to throw rocks and glass bottles and also started to spray water at the house from their balcony. The police were called, but never arrived. When the stone throwing ended, a group of foreign activists and citizens approached the police with photos and were asked to make a CD of them for officers to have a look at.

And finally…
And as I write this, the checkpoint at the base of the hill is being strengthened with more soldiers and the military controlled area around it is being expanded.