Belfast women protest expansion of settlements in the West Bank 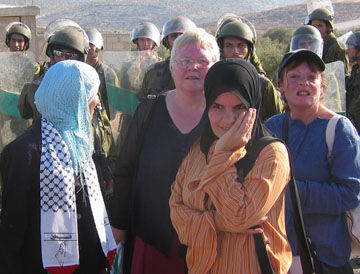 A group of women from the Falls Road, Women’s Centre in Belfast, Ireland, today joined the International Women’s Peace Service in a demonstration against the expansion of settlements in Palestine’s West Bank.

About 60 women, many from an international organization called Women in Black, protested outside the Ariel Settlement, the largest of the illegal settlements in the West Bank. They were pointing out that although Israel is disengaging 8,000 settlers from Gaza, there are another 400,000 in the West Bank, and there are plans to expand these settlements further.

The women protested in silence and held up signs declaring “This is stolen land” and “End the Occupation,” however as soon as the women arrived the area was declared a closed military zone and they were told to disperse. They were met with hostility by the settlers and were spat upon. At one point a man stopped his car and attacked the demonstration, ripping up a Palestinian Flag.

While the demonstration was under way, a few miles away in Shiloh, close to Ramallah, three Palestinian workmen were shot dead by Settlers.

One of the women in the group from Belfast, Brenda, said of the demonstration:

“I feel that the demonstration was very positive. You can see that these people want peace. They just don’t want to be caged like animals, but to be treated like human beings. Since I have been in Palestine I have seen tear gas and stun grenades used, and it is commonplace for children to be killed by plastic bullets. My husband was shot dead by the RUC, and there was never a conviction. I see the same impunity being enjoyed by the Israeli army.”

While the world is being told that disengagement is the beginning of the end of the occupation of Palestinian territories, the people here see it as it actually is; it’s a diversion meant to distract attention from rapid expansion of settlements in the West Bank. So long as the Israeli government continues to violate international law with the construction of illegal barriers and settlements, any talk of peace will remain nothing more than words.”

Ariel Settlement is the largest of settlements in the West Bank. It was established in 1978 during the Camp David Accord. About 62 percent of land belonging to villagers in Sulfit, Marda, Iskaka and Kefl Hares will be confiscated to construct the wall, expand the settlement and build a settler-only road. This area was initially declared a military zone, but was later transferred to civilian use. Benjamin Netanyahu once declared Ariel the capitol of the region.