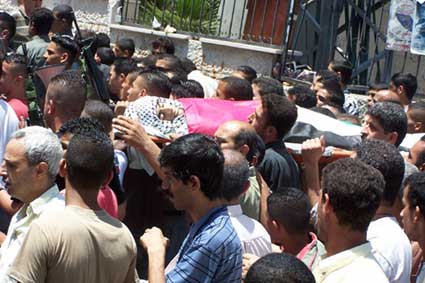 On Monday Balata residents endured their second child martyr’s funeral in five days. Fourteen year old Noor Faris Njem was shot in the head late last Wednesday evening when the Israeli army came to Balata Refugee Camp and, without warning, opened fire on unarmed civilians. Noor (meaning light) was peering round a wall to see if the jeep was still there when a soldier shot him in the top of his head. After the best efforts of medics, he died on Sunday afternoon, the second child to die from injuries inflicted by the Israeli army that night. In retaliation for Noor’s shooting, two sixteen year old fighters lay in wait to fire at the army when they entered the camp. Khalid Mohammed Msyme was shot dead and the other boy is critically injured. 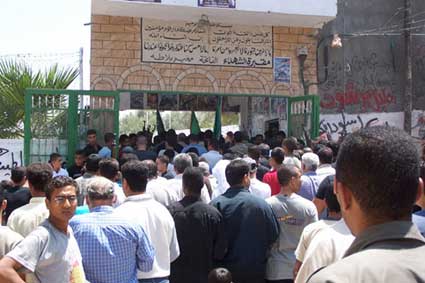 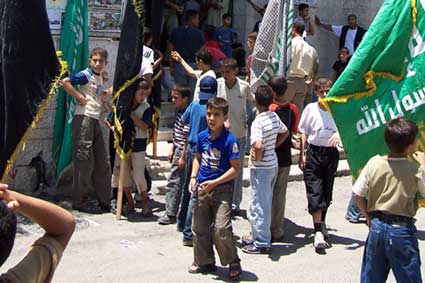 Noor’s death was announced over the mosque at 7am by a man who could barely speak for the emotion. Although we had expected this news for several days, the death of a child is always disturbing. I am sorry to say we have lost count of how many funerals we have attended here. It doesn’t get easier. On the contrary, I feel the weight of this more now. At first I was relieved to find that I could bear the emotion of the occasion. With time, and deepening bonds to the community, I feel closer to tears with each martyr. Not tears of grief, these people are not my own family, tears of frustration at the futile waste of life here. With these latest two deathsI also feel a loss of hope for peace here. For the last four months Palestine is supposed to have enjoyed a ceasefire. It doesn’t feel like peace in Balata. In that time there have been countless incursions, dozens of injuries of Palestinians by Israeli soldiers, scores of arrests, an invasion, curfew, assassinations of two residents of Balata and now the shooting of three children, causing the death of two.