Peace means the freedom of movement 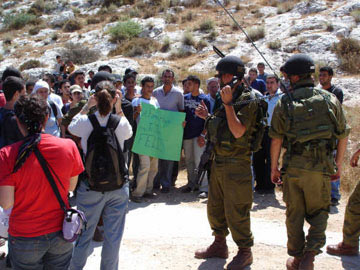 Eight ISM Internationals from Canada, Sweden, and Spain, along with 5 Israeli activists joined in a spirited march with the villagers of Asira to protest military closures and demand free movement for Palestinians.

The demonstrators walked along Sabataash road (5km distance to Nablus) towards the 3 giant mounds of earth serving as the roadblock since the beginning of this Intifada. Five families live outside of this roadblock and are unable to reach their homes by vehicle. Israeli army jeeps regularly patrol the area and prevent people from accessing their land.

As the march walked over the roadblock, Israeli soldiers came down from the hilltops to stop the demonstrators. The villagers were told to return to their village immediately. International and Israeli activists began arguing with the soldiers about the so-called closed military zone, but were eventually pushed back. The soldiers took the ID from the Israeli activists for sometime.

The Commander engaged in a heated debate with the activists claiming that he had the duty to protect his family from the terrorists, and that he never killed innocent civilians. He also said that he had Palestinian friends who agreed with him and wanted to destroy Fateh. When questioned, he admitted that his so-called “friends” were employed by his family and cleaned his house.

As the demonstrators were pushed back, and the majority of residents returned to Asira, the Commander on site ran to get an elder Israeli activist from the crowd. The Commander is from the Ariel Settlement were Sharon visited last week. He warned the activist, “Don’t go with them, they are terrorists. You must come with us.” Although, the Israeli activist refused to go with the Commander, the soldiers forced him to join the other Israeli activists that had been stripped of their IDs again and detained. They were forced into the army jeeps waiting behind and taken away.

Asira residents are determined to break closure, and will be organizing actions in the upcoming weeks to continue the fight for their freedom.