FOR IMMEDIATE RELEASE: Staying Arrested Together

INTERNATIONAL SOLIDARITY MOVEMENT — Three international activists are refusing to sign release papers after being arrested alongside a Palestinian protester. The arrests occurred during a nonviolent action against the Illegal barrier in the West Bank village of Bil’in. The three women, one Danish and two U.S. citizens, say they won’t accept conditional releases so long as the Palestinian they were arrested with is not offered the same treatment. The three go before a civil judge Thursday July 21. The Palestinian awaits a military trial.

The arrestees were among a group of Palestinians, internationals and Israelis at a nonviolent action against construction of the barrier on Palestinian land.

Alison Brim of North Carolina, Nina Olsen of Denmark, and ISM cofounder Huwaida Arraf, a Palestinian American of Michigan, were taken in front of a judge and offered release with the condition that they stay 500 meters away from the path the wall in Bil’in. Meanwhile, Bil’in resident Tamer Al Khatib was taken to Ofer Military Base where he awaits military trial. In solidarity with their Palestinian friend, the international activists refused. They are being held in Givaat Zeev police station, awaiting a court appointment set for 12 p.m. Thursday at the Peace Court in the Russian Compound.

The four were among seven activists arrested Wednesday morning in Bil’in. Also arrested were Pel’e Minddal of Denmark and Israelis Avi Mugrabhi and Moshe Berger. Minddal signed papers for immediate release in order to get medical treatment for his arm, which was injured amid the arrest. Berger and Mugrabhi also signed for their release.

The protest Wednesday involved several activists. The seven who were arrested had locked themselves inside a large metal cylinder decorated with symbols of the Palestinian political factions and a Palestinian flag which was placed in the path bulldozers use to build the wall on Palestinian land in Bil’in. Only their heads and feet poking out of port holes and they were chained to one another inside.

Israeli soldiers beat them with batons and cut into the cylinder, forcing the activists out.

Interestingly, the arrested activists were charged with attacking the soldiers. The charge was dismissed by a judge Wednesday who had viewed a video tape of the incident and stated that it obviously was the soldiers who had attacked the activists.

Violence, false charges and harassment are not new responses to the nonviolent resistance in Bil’in. Abdallah Abu Rahme and Akram Al Khatib, members of the Bil’in Popular Committee Against the Wall have been in detention at Ofer Military Base since their arrest during a non-violent demonstration Friday, July 15. They have a military court appearance scheduled for today at Ofer Military Base. 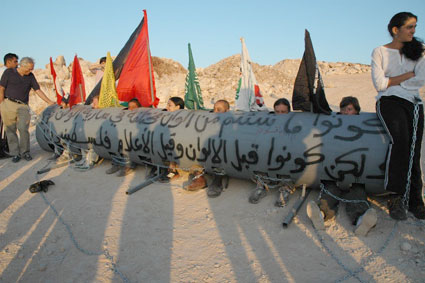 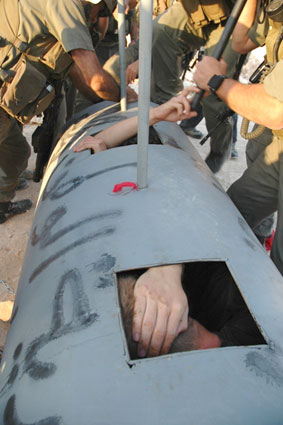